On August 24, several top CSGO streamers were hit with bans on Twitch while they were re-streaming one of the official broadcasts of the Berlin Major.

According to Erik ‘fl0m’ Flom, the bans were a result of StarLadder filing DMCA complaints against anyone streaming the tournament on their own channel, even if the casters were muted and the streamer’s personal sponsors were hidden.

This clearly pissed off summit, who did not like the fact that some of his peers were being hit with surprise bans without some sort of communication ahead of time. 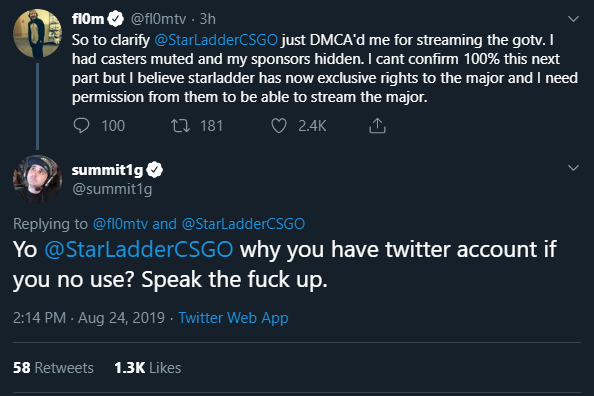 Summit’s bashing of StarLadder did not stop there, as he went on to call their decision a “shitty move,” considering some of those affected were top streamers of the game, not to mention ex-pro players themselves.

“Yeah, a pretty shitty move to not just speak up,” he wrote. “Especially to someone who’s been around so long as you have, making that category last, while tournaments have turned to shit.”

He took another shot at the company by essentially calling them greedy: “They’re getting that big streamer money bro! Can’t have you taking it.” 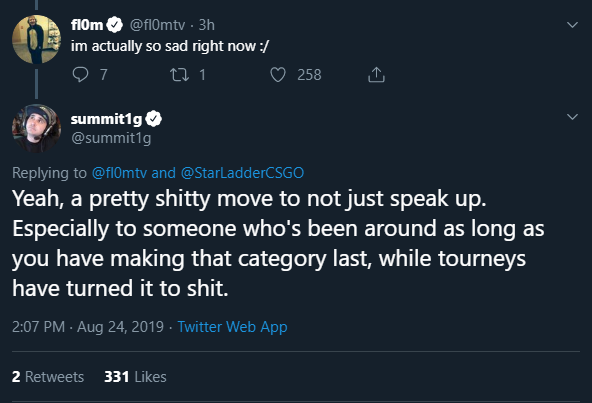 At the end of the day, rules are rules, and if StarLadder own exclusive rights to broadcast the Berlin Major, then it’s also their prerogative to censor those who are also streaming the tournament without consent.

What summit’s issue with the situation appears to be is that the company approached everything with a hush-hush attitude, instead of offering warnings and explanations to these former pro players whose streams are what keeps the game going strong on Twitch.