Mouz’s December run saw them solidify their spot in the top 5 with three tournaments victories and a second place at EPICENTER. One of the ongoing storylines of the Mouz run was their consistent beatdown of EG. So the question remains, why does Mouz beat EG?

Before we get into some of the contextual reasons, we need to get some of the basic facts straight first. EG and Mouz have technically played in five series, but one of them had EG playing with Igor “crush” Shevchenko as a stand-in so we will only count four of them. As that’s the case, Mouz are 4-0 in series wins and 8-1 in map score. Their one loss was an overtime loss on Inferno. Outside of that they have three wins on Train, two on Overpass, two on Nuke, and one on Mirage.

The four encounters happened at DreamHack Malmo, CS:GO Asia Championships, ESL Proleague Season 10 Finals, and EPICENTER. The first time they played at Malmo, it was a bit of a write-off as EG had just come off of their ESL New York victory and had one day of travel before going to DreamHack. However EG have continually lost to Mouz in the head-to-head, so that particular match now holds more meaning than it did at the time. 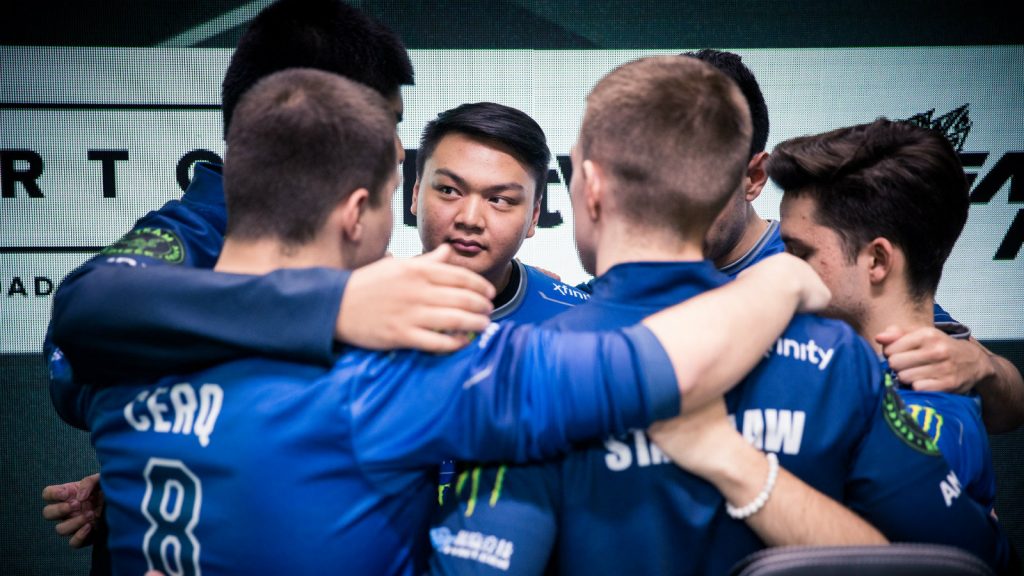 However unlike the Astralis-EG map vetoes or the Astralis-Liquid map vetoes, there isn’t an obvious line that the two sides are fighting over. If you look at the stats, player form shifts around for the Mouz side, but generally speaking their players perform better. The problem is that there isn’t any specific man-to-man matchup that tells us why Mouz have a decisive edge.

What’s more, it doesn’t seem to be a stylistic advantage like the Astralis-Liquid matchup. Liquid play towards a safe, slow, standard style which goes directly into Astralis’ best strengths, teamplay and reading the map. EG is more of a loose system while Mouz play a versatile and explosive style.

If you look at the player form, it’s true that the Mouz players were brilliant in December, while EG’s form had fallen off, the most notable example being Vincent “Brehze” Cayonte. Even so, that isn’t enough to quite explain why the matchup is so Mouz favored. 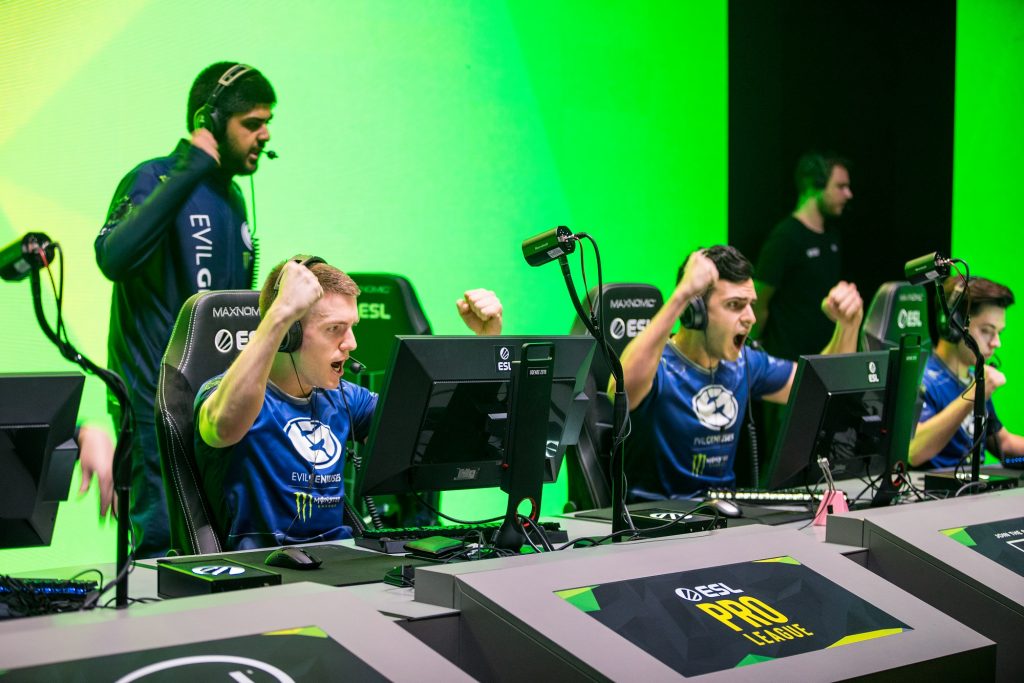 If I had to postulate, I think two factors are at play. The first is Karrigan’s preparation in the map veto and tactics and Mouz’s faster learning curve relative to EG.

The map veto is Karrigan’s calling card and he’s arguably the best map veto player in the world. The reason he’s brilliant at the map veto is because he’s great at conceptualizing and simulating the strengths and weaknesses of any given lineup. It’s also why he’s been the best in-game leader at leading international mixed lineups to success. One of his best tricks is to constantly shift what he’ll pick so that the other side can never get comfortable.

This is what happened in the first three Mouz-EG battles. At Malmo the veto was:

Later at CS:GO Asia Championships the veto was:

In three different instances, Mouz picked three different maps as their first pick. At Malmo they went with Mirage, at CAC they went with Nuke, and at EPL 10 they went with Train. It’s hard to know why Karrigan decided to pick these different maps, but based on what I saw there were potentially good reasons for all of them. At DreamHack Malmo, EG had just gotten off the plane and had no time to prepare. At ESL New York and StarLadder Berlin, EG only played Mirage once in the quarterfinals at StarLadder Berlin and Na`Vi were the ones that picked the map. 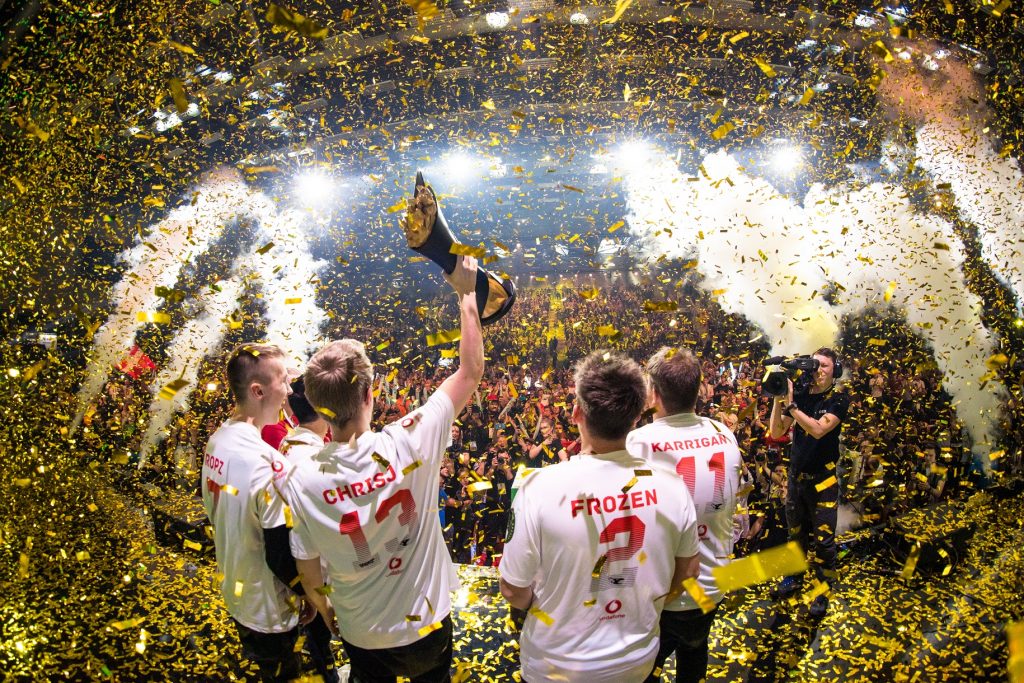 Given the time frame, the fact that EG avoided playing New York, and Mirage was a good map for Mouz, it looked to be a good punish pick at DreamHack Malmo. Even more so when you consider that Peter “stanislaw” Jarguz likes to run a fairly loose system, so it was unlikely that EG had come up with a different way of playing Mirage in the interim between Berlin and Malmo.

This proved correct as Mouz were perfectly reading EG’s T-side throughout their half with mid-round pushes. EG liked to take mid control with 4 players around the 1:00 mark and Mouz exploited that multiple times. In the 21st round, they had David “frozen” Cernansky push T-con while Finn “karrigan” Andersen took B aps. Each push out gave them information and created setups that EG couldn’t flush out easily whether they went to A or B. In the 23rd round they did a three man crunch on mid that broke EG’s mid control. In the 24th, Robin “ropz” Kool played near window around the 1:00 mark to disrupt EG’s mid control, and in the 25th Karrigan did a peek from cat. It was a dominant CT-side victory and showed that Mouz had a clear idea of what EG wanted to do on Mirage.

In the rematch at CAC, Mouz punish picked EG again. Instead of going to Mirage (which at this point had become a better map for EG and arguably why Mouz banned it), Karrigan went with Nuke. Nuke was a good map for EG in October, but they had lost their grip on it in November and had lost it twice at IEM Beijing. 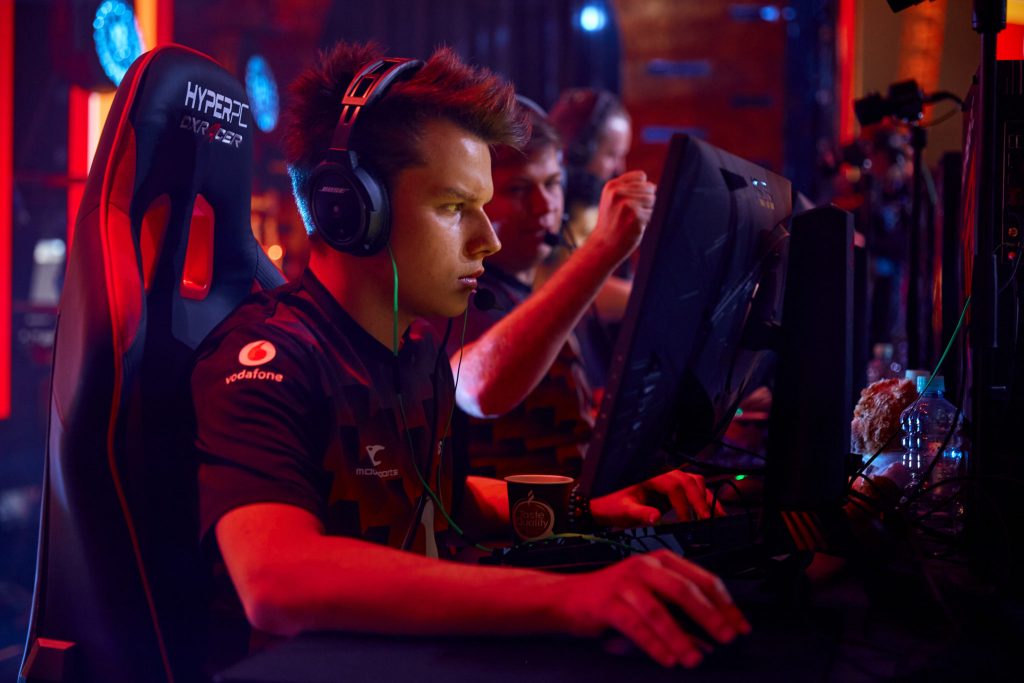 By the time EPL 10 came around, Mouz decided to change the map veto again. This time they went for Train as it was becoming something of a specialty map for the team. They smashed EG so hard on Train that Train became the defacto pick from that point forward whenever Mouz played against EG. Beyond the map veto, Karrigan once again showed his tactical preparation. On Nuke, Mouz 16-0’d EG. While EG didn’t play well on an individual level, Mouz were miles ahead when it came to reading what EG wanted to do.

EG in general like to use yard nades in one of two ways. They either send one or two players toward secret and then send the remainder to take ramp, or they send a deathball to try to take control of yard. Mouz had the answer for either approach. Whenever EG tried to take ramp, they got caught in an ambush. In round 7, Chris “chrisJ” de Jong was boosted on the boxes in the corner and got a multikill that ended the round. In the 13th round, EG used a similar tactic, but this time ropz and Ozgur “woxic” Eker had a crossfire at the bottom of the ramp that ended their hopes of hitting the B-site. When EG tried to take control of yard, they ran into different setups from ropz and woxic or ropz and chrisJ.

Overall Karrigan’s preparation in the map veto and for EG’s T-side was one of the decisive edges that Mouz has carried through their multiple encounters against EG.

The second reason is the faster learning curve. Both EG and Mouz had harsh schedules at the end of the year. Neither squad had a lot of time to rest as they went from LAN to LAN to LAN. The difference between the teams was the improvements they made along the way. At CAC, Karrigan made critical changes to the communication setup and the roles to take Mouz to the next level. He had frozen become the secondary lurker and ChrisJ take the entry role. He also had Woxic sit in the center of their setup to help facilitate communication better across the board. These small changes improved the chemistry, CT-sides, and T-side efficacy. In turn, it has helped solidify Mouz across their entire map pool. 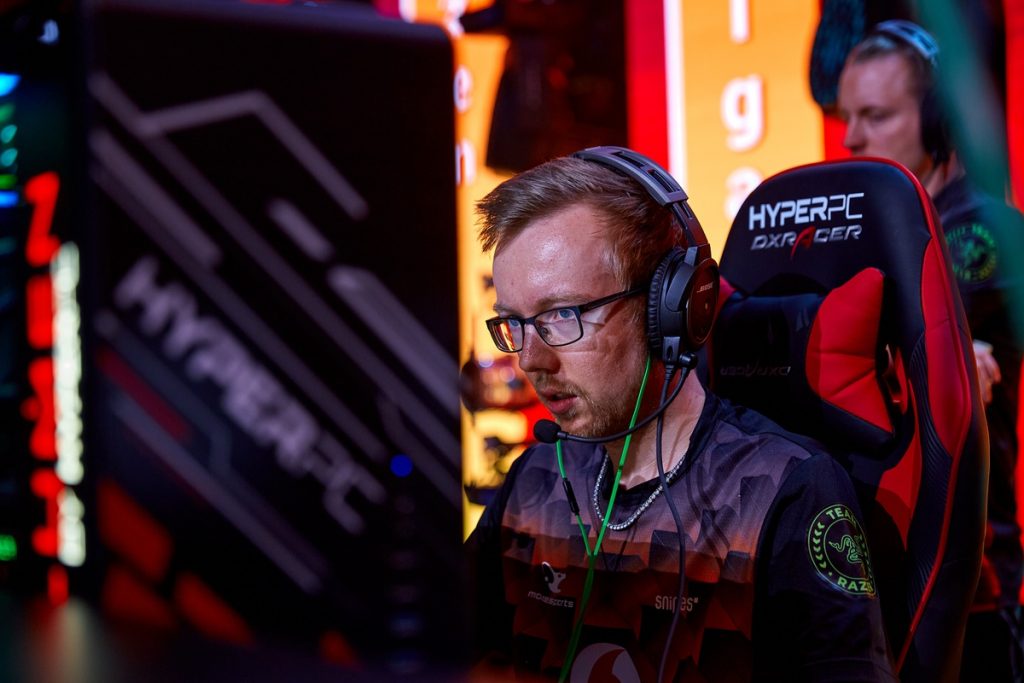 In contrast to that, EG have seen their map pool slowly disintegrate. When they were in brilliant form, they rode Inferno and Dust2, but once their form started to fall off, they weren’t able to find as much success across the other maps in the pool. This is why EG lost the psychological edge to Astralis at ECS Season 8 Finals.

A more concrete example might be how both teams adapt throughout a half. In the EG vs forZe game at EPICENTER, EG lost to forZe 1-16 on Mirage. The loss wasn’t too indicative of anything as the match only decided the seeding in the playoff bracket. However one moment did stick out to me. ForZe used a two man T-con setup twice in their half, but EG had different players dealing with it in different rounds. Ethan “Ethan” Arnold played against it the first time and Tarik “tarik” Celik played against it the second time. Tarik should have been aware of the setup, but it wasn’t communicated or it slipped their minds as they weren’t particularly focused.

In contrast to that, the Mouz players are constantly learning. Overpass was played twice between EG and Mouz at CAC and EPICENTER. The first time Mouz played against EG, they were using more aggressive setups towards long and toilets. These setups were getting killed off by EG’s takes for mid and long, so the second time they played, they focused more on water and short control. If you look at the 8th rounds of both games. At CAC, Mouz don’t have info in water, frozen pushed out long around the 0:45 mark and dies, and EG win the round. At EPICENTER, frozen plays more passively, ChrisJ pushes the water area around the 0:30 mark and is in position for a fast rotation, and woxic makes first contact with his AWP. 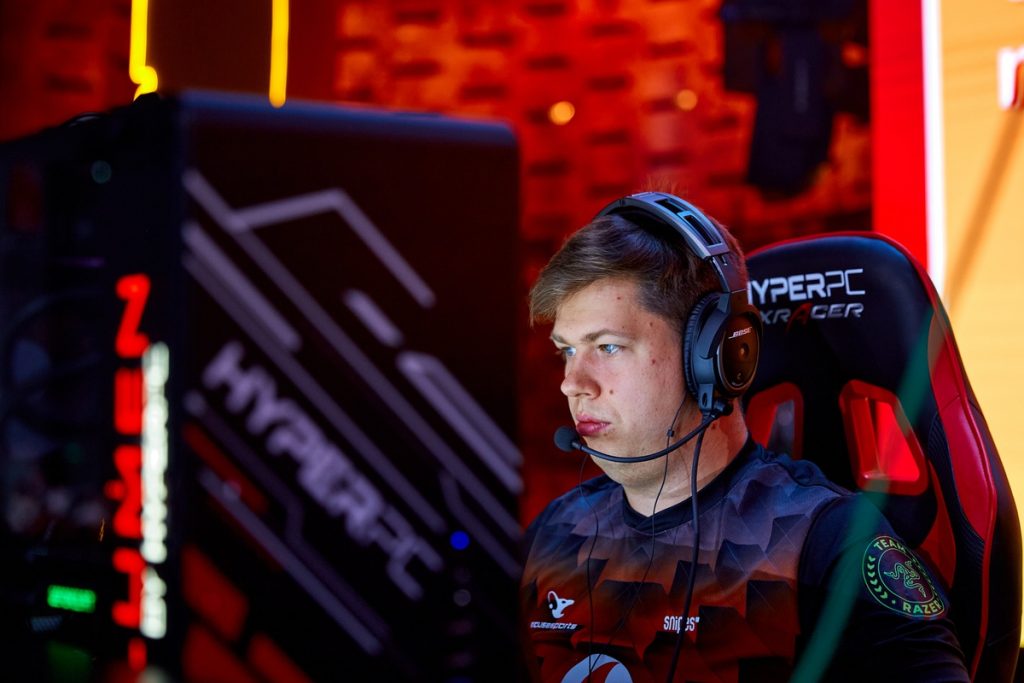 Mouz made a bunch of small adjustments between their two encounters that made the difference. This also happens on the T-side. At CAC, in the 25th round, EG use a double-long setup and when they play again at EPICENTER, karrigan recognizes the setup and just goes straight up mid to plant the bomb.

This difference in learning curve is correlated to each team’s respective map pool. By the time the Berlin Major ended, both teams seemed like they could play 6-7 maps in the map pool. As time has gone on, EG showed that they didn’t keep their Overpass strength that they had with the Damian “daps” Steele lineup. They looked hot on Train at Berlin, but it fell by the wayside. Their four strong maps are Inferno, Dust2, Nuke, and Mirage.

In contrast to that, Mouz’s map pool became stronger. After changing some roles, their Train has become a specialty pick. They are as good as almost any of the top teams on Inferno and Dust2. Their Mirage and Nuke are more in the middle of their pool. It’s harder to gauge their exact strength, but they are competitive enough to beat Fnatic on Mirage and EG on Nuke. The two maps they don’t like to play are Vertigo and Overpass, but Mouz are still good enough to win either map if someone tries to punish pick into them. EG tried Overpass twice and Liquid tried Vertigo once. Mouz won those three encounters.

Concluding Remarks on the Mouz-EG Matchup

The Mouz-EG battles is considered a junior Astralis-Liquid battle of sorts. While I can see the comparisons, the reasons for the losses are different in nature. The Astralis-Liquid matchup is more of a strategic and stylistic advantage whereas the Mouz-EG matchup is harder to define. While Mouz beat EG, it isn’t something inherent in their style, so much as the progression of their respective teams. Karrigan’s preparation, Mouz’s growth, and EG’s decline seem to indicate that the results of the matchup are more about the strength of each team more than any specific stylistic advantage that Mouz has. As that’s the case, this rivalry can change depending on how the two teams grow in 2020. If Mouz hits a slump or EG revitalizes their map pool, we could see a switch in results.

Adam Fitch: The Olympics’ first attempt at esports is a shambles