Is Semmler returning to CSGO after Overwatch League departure?

CS:GO fans are speculating that Auguste ‘Semmler’ Massonnat could be returning to the game after he announced he will no longer be a full-time caster for the Overwatch League.

Semmler is the latest member of the Overwatch League’s broadcast talent to announce their departure ahead of Season 3, following commentary duo Christopher ‘MonteCristo’ Mykles and Erik ‘DoA’ Lonnquist, and host Chris Puckett.

In the wake of his announcement, CS:GO fans have been quick to suggest that Semmler might be making a return to the game he made his name in, with fellow CS:GO commentators and even pro players reacting to the news on Twitter.

Alongside Anders Blume, Semmler was part of CS:GO’s original iconic commentary duo. The pair were the primary voices for the game for multiple years, but in September 2017 they announced that they would be going separate ways.

While Anders formed a new partnership in CS:GO with Jason ‘Moses’ O’Toole, Semmler stepped away from the game entirely, instead moving to the Overwatch League where he teamed up with Robert ‘hexagrams’ Kirkbride as one of several casting pairs for the first two seasons of the league.

With Semmler now departing the league ahead of Season 3, however, it’s very possible he could return to CS:GO, and fans are speculating that he could be heading to the upcoming BLAST Premier league.

Semmler appeared at multiple BLAST tournaments during 2019, so it would be no great shock to see him lend his voice to the BLAST Premier’s Spring season, which kicks off on January 31 – a prospect that BLAST may even have hinted at themselves by liking Semmler’s announcement on Twitter. 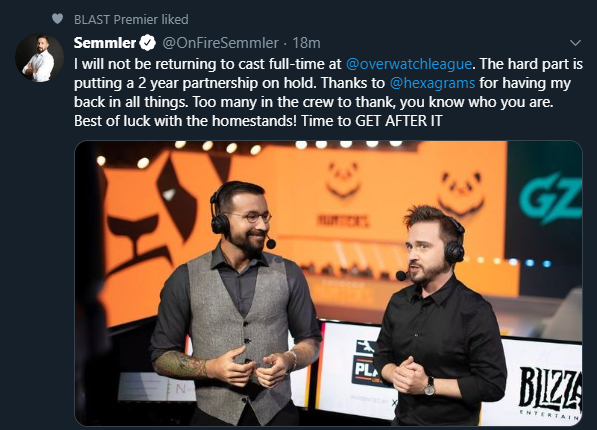 Prior to his announcement about leaving the Overwatch League, Semmler also wished Moses a happy birthday while stating “Here’s to what’s coming in 2020” alongside a picture of himself, Moses, and Anders commentating at a BLAST event.

While these “hints” could be entirely meaningless and coincidental, with Semmler having yet to make any official announcements about his future plans, it’s certainly enough to get CS:GO fans excited about the prospect of having one of the game’s most iconic voices return this year.