Armor in Call of Duty’s Blackout battle royale mode is set for a change. That’s according to a hint dropped by Treyarch Studio Design Director David Vonderhaar.

Vonderhaar, who has been very active on social media in leading up to the release of Black Ops 4, has recently confirmed on Twitter that Armor will be receiving a nerf ahead of the full launch of Blackout.

“I’ve been to the future,” he tweeted. “I’ll tell you what happens. You are all very pleased with the nerfs we did to the armor in Blackout,” 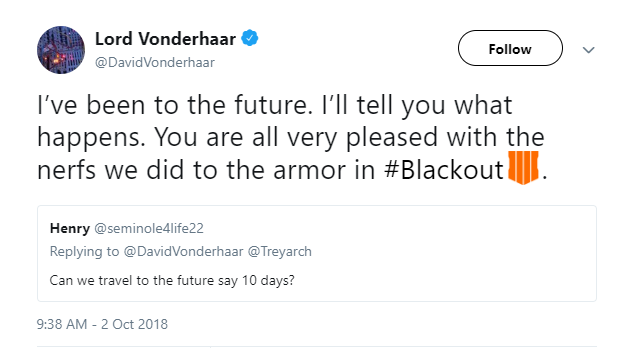 There are several things to note in the wording of his tweet, such as the fact that he said “nerfs,” which could mean that Armor was changed in more than one way.

This would make sense considering that there are three different Levels of Armor in Blackout, although Level 3 was the one which most had issues with during the beta phase.

Although Vonderhaar’s comment is not specific, there are numerous ways that Armor could have been nerfed, such as the damage prevention threshold, rarity on the map, structural integrity, and more.

Considering that Vonderhaar says “you are all very pleased” would suggest that Treyarch has made the specific changes that the player-base asked for in their feedback, which was to considerably reduce the protection offered by Level 3 Armor.

However, one thing that players can be sure of is that Level 3 Armor is here to stay, as Vonderhaar confirmed in a recent interview that the studio does not feel it would be right to remove it from the game.