Leading UK video game retailer, GAME, has added a description to the Blackout section of Call of Duty: Black Ops 4, suggesting it will be a 100 player experience – although it is unconfirmed.

Similar to other battle royales like Fortnite, PUBG and H1Z1, which all have 100 players, this new listing seems to suggest Black Ops 4 will aim for this industry standard.

It was initially believed that Call of Duty would aim for a slightly reduced player count, in order to ensure high frames per second and server speeds are retained, and 100 players is certainly an ambitious feat for such a graphic intensive game.

But, according to the listing from GAME, players will drop into a match “vs 99-other players”. You can see the game description on the official website here. 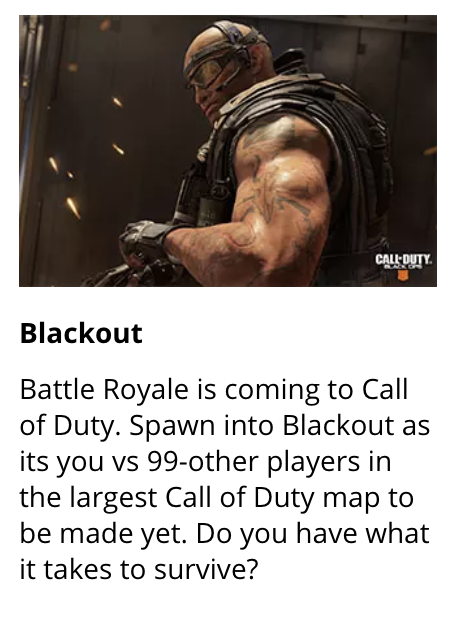 “Battle Royale is coming to Call of Duty. Spawn into Blackout as its you vs 99-other players in the largest Call of Duty map to be made yet. Do you have what it takes to survive?”

This doesn’t mean that it is absolutely confirmed of course, as this simply could be placeholder text, or a presumption from GAME staff, just going off the ‘typical’ battle royale experience.

The description comes from a breakdown of the whole game given on the website, which also outlines the basics of the other modes and features.

It will be confirmed for certain in the Blackout beta, which is only a matter of weeks away, starting on September 10 for PS4 players first.

Treyarch has remained tight-lipped on much of the Blackout information, including player count, but they have made it clear it is a very large undertaking.

The map itself is said 1500 times the size of Nuketown, according to Treyarch lead designer David Vonderhaar. With a map that large, 100 players certainly seems feasible, but it will be the stress put on servers and games consoles that will be the big test.