Ben ‘Bance’ Bance has announced that he is now a restricted free agent heading into the Call of Duty: Black Ops 4 season.

The Brit has been representing Splyce since December of 2015 but he took to Twitter on August 31 to say that he is now “exploring every option possible for next year”.

However, the relationship between the player and organization isn’t completely over, as Bance reveals he is still under contract for the time being.

It is currently unknown whether Bance requested to leave the team or whether Splyce decided to end their long-time association with the man that helped them win the 2017 CWL Pro League Stage 1 finals.

The move means that Jordan ‘Jurd’ Crowley is now the only remaining player from Splyce’s Call of Duty: WWII roster. The Irishman stated that he was “looking to build something going into the next game” just days ago and also made it clear that he was open to playing with people from all regions. 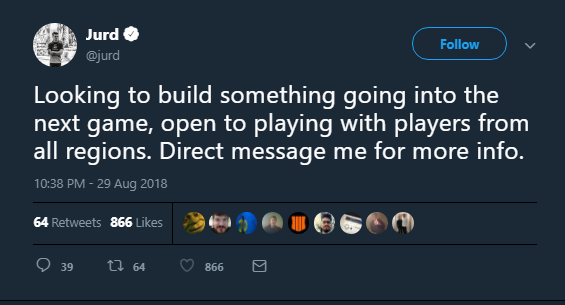 While this might have suggested that he was also considering leaving the team, there is a theory that he could be building an international roster under the Splyce banner.

Splyce’s CEO and co-founder, Marty ‘Lazerchicken’ Strenczewilk made some bold claims on August 29, saying that the organization was going to “build the best team IN THE WORLD” for Black Ops 4, promising incredible infrastructure, and saying “If you’re a top player, you’re on the radar of Splyce, regardless of region.”

It has often been noted that Jurd would be willing to make a move to North America and the fact that Splyce have parted ways with three of their European stars could be a sign that they are considering a move across the Atlantic.