OpTic Gaming’s unexpectedly early elimination from the 2018 CWL Championships has dominated the August 16 headlines of Call of Duty esports.

Players and fans are still reeling from the shocking realization that the defending World Champions have been eliminated in the massive event’s group stages, in just the second day of the five day competition.

With Champs being the final event of the WWII competitive season, OpTic will finish the year without any major tournament wins for the first time in recent memory.

A trophy-less season will be especially hurtful for player Seth ‘Scump’ Abner, who came into WWII having won at least one championship during all seven CoD titles he has competed in.

Since starting his career with Team FeaR in 2010, Scump has been the embodiment of consistent domination, quickly establishing himself as one of the best players in the esport’s history.

His championship streak began with Black Ops 1, in which he won three events, followed by four in Modern Warfare 3, one in Black Ops 2, one in Ghosts, nine in Advanced Warfare, five in Black Ops 3, and four in Infinite Warfare, including his first ever World Championship. 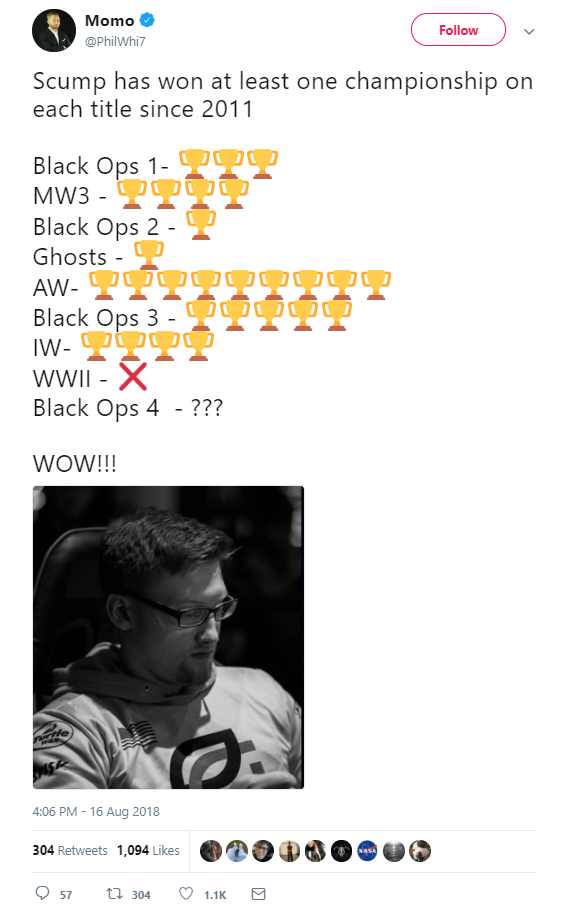 However, it cannot be denied that OpTic have under-performed this season, and Scump has self-admittedly been a part of this year’s failures.

He has described his performance in the Pro League Stage 2 Playoffs as one of the worst of his career, blaming himself for costing his teammates.

However, Scump and his team still came into this year’s Champs with high hopes, having practiced long and hard and even held LAN boot camp sessions with compLexity Gaming.

Unfortunately, their dream start quickly turned into a nightmare ending, as the players now face the sheer cold reality that they will be finishing the season empty handed, and for Scump, for the first time in his entire illustrious career.

You can keep updated on all schedules, scores, group standings, brackets, and live-streams via ourdedicated 2018 CWL Champs hub here.