OpTic Gaming Los Angeles lost an excruciatingly close match to the Minnesota ROKKR at the Seattle Home Series, which led to a Twitter rant about the Call of Duty League’s servers from star man Austin ‘SlasheR’ Liddicoat, among others.

Losing in competitive Call of Duty is never fun, especially when the defeat comes in a match that goes the distance – all the way to game five, round 11.

That was the case for OpTic Gaming LA, who could not clutch up on Arklov Peak Search & Destroy against the Minnesota ROKKR and have now been forced down to the losers bracket, where they fill face elimination on Saturday.

However, not an instant had gone following the result when several of their players angrily took to Twitter and complained about their apparently poor connection to the CDL servers.

SlasheR, in particular, was very passionate in his tirade: “Want to know why there was a huge delay? Because I’m being forced to play on 100+ ping because their Texas server is conveniently unplayable. Pathetic, someone needs to be held accountable.”

He went on to claim that the CDL accommodated Minnesota when they had similar complaints, but were not so cooperative with OpTic.

“When Minnesota skips for one second in a test lobby, the league says the host is unplayable,” he said. “‘Deal with it, nothing we can do.’ Twice now. Unfair BS, they need to be held accountable.”

The former World Champion even went as far as to say that he’d “rather not play,” when a fan accused him of making excuses “every time you lose.” 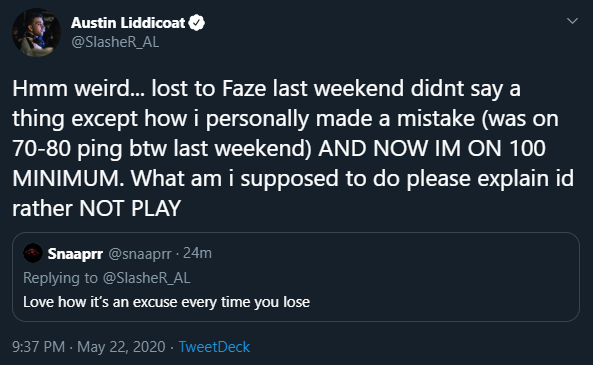 SlasheR was not the only one to express such claims; both Dashy and the recently-promoted Chino tweeted about having to play on 100+ ping, with the former saying that he “misses LAN.” While it’s never good to see players so frustrated about having to compete in such conditions, connection issues were always going to be an inevitability when the CDL announced, back in March, that the entire 2020 season would be played online.

The first event following that change, CDL Dallas, had its fair share of problems, and after similarly passionate complaints from Empire star Crimsix, the league announced the implementation of several new servers and a ‘server veto’ system that would, in theory, help mitigate some of the issues.

SlasheR himself also complained around that time as well, calling the situation “just unacceptable” and saying “when does the next Black Ops game release?”

After a couple of events with relatively few grievances from players, it appears that the predicaments have resurfaced, so only time will tell if, and how, the CDL will deal with them this time.

Don’t miss any of this weekend’s Call of Duty action by checking out our CDL Seattle hub, which includes streams, updated scores, brackets, and more.