Karl-Anthony Towns is an NBA All-Star and can hold his own in video games as well, but according to him there is one NBA player who should put the sticks down.

Towns was answering a question from Twitch streamer Jordan ‘LEGIQN’ Payton about the worst Call of Duty player he knows and he did not hesitate with the response.

Zach LaVine, he is the worst. Oh my God he is so bad. He loves playing video games too, God bless his soul.

Unfortunately for LaVine, Towns kept going and piled on.

The two NBA rising stars were teammates for one season in Minnesota, so Towns had plenty of first hand experience with his friend’s CoD abilities.

Towns: He knows it too. He knows he’s trash.

LEGIQN: Zach, if you are watching, I would like to apologize-

Towns: -No I don’t want to apologize. There were a lot of hours that I spent with you and I was not enjoying that… I told you I did, but, I didn’t.

Towns and LaVine are good friends and their Twitter interaction confirmed it was all in good fun. 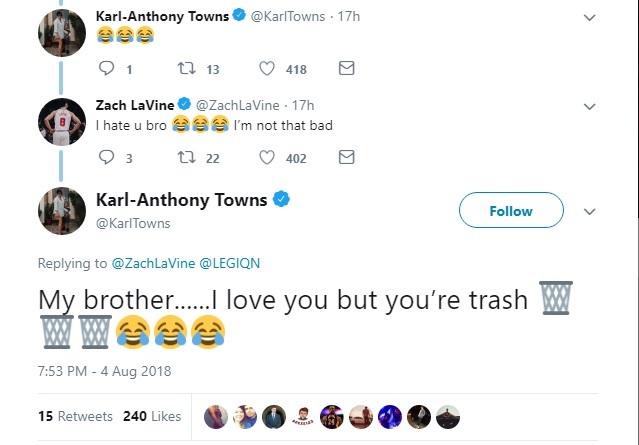 LaVine’s Dad even weighed in on his son’s poor gaming, with Towns putting him on speaker phone for everyone to hear.

To see the public roasting of LaVine by his friends and family, check out the clip below.

Wow, @ZachLaVine is really out here getting ROASTED BY HIS OWN DAD!

@KarlTowns I can't believe you called his Father bro. pic.twitter.com/lr1yOcwB6A