The London Royal Ravens’ $150,000 Warzone Royal Ruckus tournament has wrapped up, and the Call of Duty League team’s very own Skrapz finished in first place, along with teammates Jukeyz and Deleo.

The two-day event brought together a star-studded collection of streamers, Call of Duty pros, influencers, musicians, and entertainers for one of the biggest Warzone tournaments we’ve seen since the battle royale launched in March.

$100,000 of the prize pool was donated to the Equal Justice Initiative, while the remaining $50,000 was split among the top four teams from the final bracket.

As fate would have it, the Royal Ravens’ own star player Skrapz and his teammates Jukeyz and Deleo ended up winning the tournament, as they narrowly edged out HusKerrs’ squad 108-106 in the grand final.

Rounding off the top-four were DougisRaw’s team, who lost to HusKerrs in the semifinal stage, and Team Stellar, who were taken down by Skrapz’s squad in the other semis match. 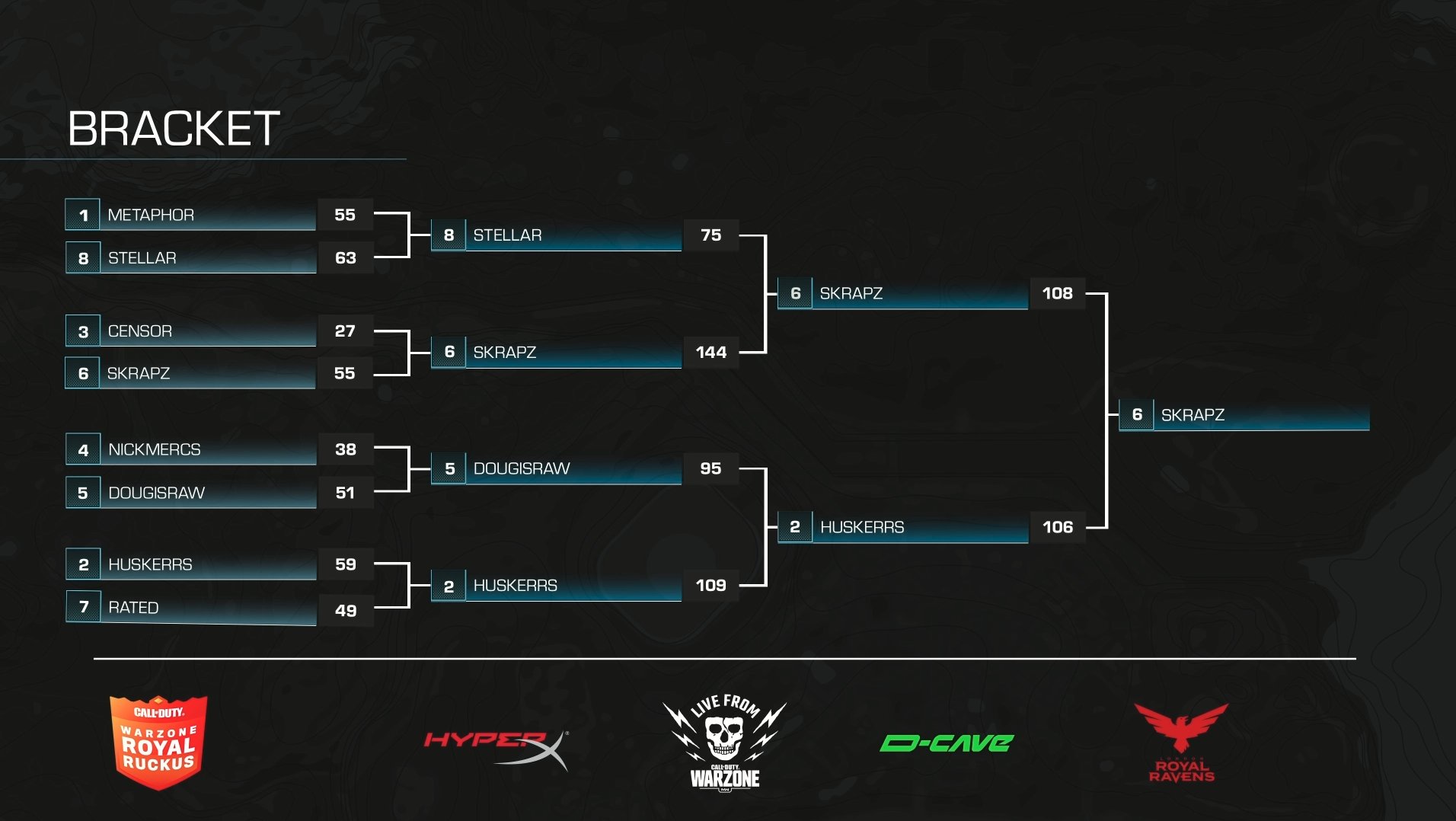 As for the remaining teams, they were all eliminated following the first stage, which encompassed the first one-and-a-half days of the competition.

Only the top eight teams in the initial leaderboard made it to bracket play, the remaining teams’ position in the final placements was based on how many points they acquired from the timed-portion.

Just missing the cut were Vikkstar’s squad and Team Dom, both of whom finished within 10 points of that eighth and final playoff spot but unfortunately had to spend the rest of the event watching. 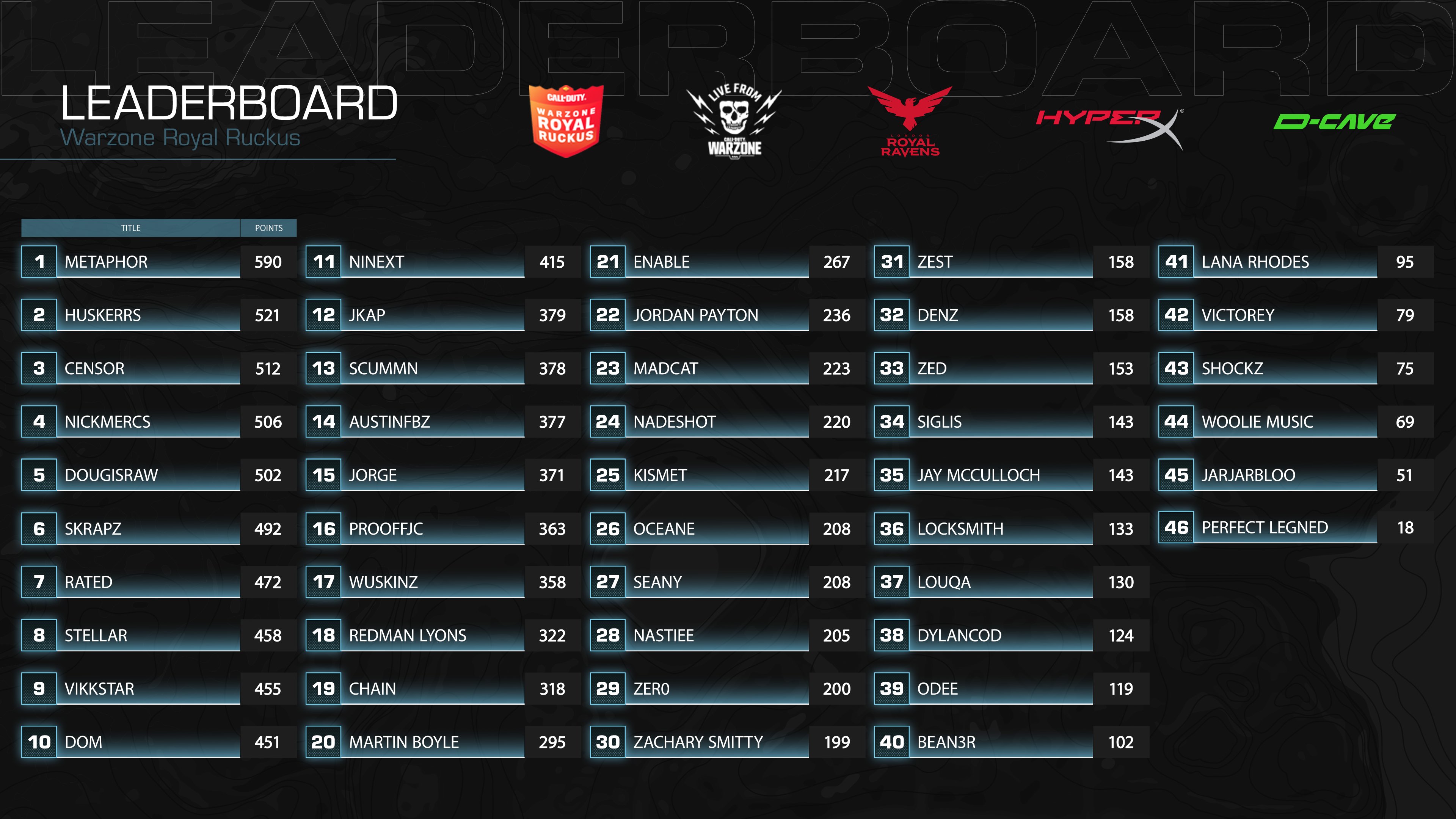 The tournament is taking place just after the launch of the new Season 4, which was delayed by a week but is now finally available.

The Warzone Royal Ruckus event will start on June 11, at 10am PST/1pm EST/6pm BST. It will run until June 12, meaning it takes place across two days.

The details for the tournament’s stream haven’t been revealed yet, but it’s fair to say we can expect to see it on Twitch, probably on a host of the competitors’ channels. The tournament is sponsored by HyperX, D-Cave and Activision Blizzard, so it’s likely the official channels will be providing gameplay clips and links to the event.

As previously mentioned, the tournament will see $100,000 donated to the Equal Justice Initiative. The EJI is an American charity that seeks to combat injustice within the nation’s legal system, offering representation to prisoners who may have been wrongly convicted or cannot afford legal support.

The EJI is an American movement to halt mass incarceration.

Away from the donation being made to charity, the winning team will receive $30,000 to split between themselves (on top of the $100,000 charity donation).

A number of the biggest sporting names in the world are getting involved in the Warzone Royal Ruckus. Two-time NBA Defensive Player of the Year Rudy Gobert will be playing, as will England cricketer Jofra Archer. Other sporting stars include:

Archer and Gobert are two of the world’s biggest names in their respective sports.

Away from the world of real sports, a host of esports stars are getting involved. This includes Turner ‘Tfue’ Tenney, the Fortnite professional who has recently branched out into CoD’s battle royale. Others include:

That rounds up everything we know about the Warzone Royal Ruckus tournament! With some of the world’s biggest esports names competing, it’s sure to be a blast for all involved, and raise a lot of money for a great cause.

Day One of the Warzone Royal Ruckus is now in the books, with a host of recognizable teams impressing. The top spot going into June 12, however, is occupied by Team Metaphor, who even broke the Trios world record during the competition, racking up 93 kills between them.

Team DougIsRaw occupy second place, while NICKMERCS’ team are in third. Huskerrs, Censor, Rated, Vikkstar and JKap are all in the top 10 teams after day one. The full standings can be seen in the tweet below:

We’ve had an action packed day today with the #RoyalRuckus
we’ve been working on getting the leaderboards out for everyone, here’s how it looks after today’s action. #RoyalRuckus pic.twitter.com/PWExAO74IA

June 12 also sees new variables added into the mix, including Royal Bounties and a Second Chance Jackpot. You can watch the action unfold at the Twitch channels of those competing.