Everything You Need to Know About the CoD: Black Ops 4 Private Beta - Schedule, Maps and Modes, Weapons, and More! - Dexerto
Call of Duty

Everything You Need to Know About the CoD: Black Ops 4 Private Beta – Schedule, Maps and Modes, Weapons, and More!

The Call of Duty community waits in anticipation as the Private Beta for Black Ops 4 is less than a day away from launching on the Playstation 4.

In order to address any and all of the questions you may have about the Private Beta, we have compiled a guide that includes everything that you may want to know, including how to access the Beta, the full schedule, modes, maps, weapons, scorestreaks, and specialists.

The CoD: Black Ops 4 Private Beta can be accessed one of two ways: either by digitally pre-ordering the game through the PS Store, Xbox One Store, or Battle.net for PC, or by redeeming a code for a Beta download key.

All those who have digitally pre-ordered the game on the PS4 can now download it and pre-load it from the PS store. If you have a Beta code, you can redeem it at callofduty.com/beta, after which a download key will be emailed to you.

The Private Beta will be live over the course of two weekends, the first of which will only be available on the PS4 while the second will be for both consoles. 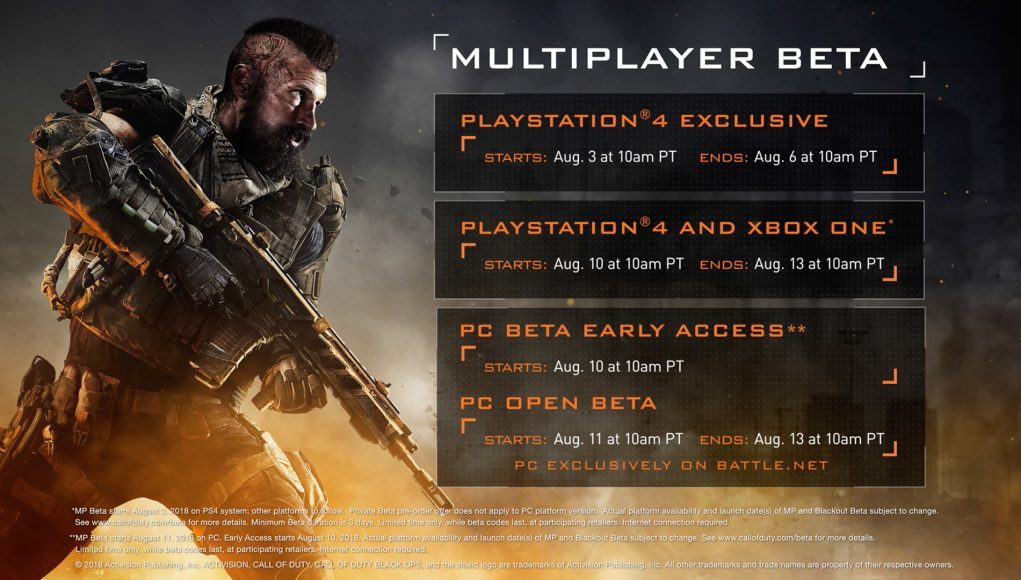 The following Mulitplayer game modes and playlists will be included, and will be updated throughout the duration of the Private Beta.

* The Multiplayer Beta is the first time that Search & Destroy and Kill Confirmed will be playable in Black Ops 4.

There will be a total of six maps that will be available in the Beta – the four that were playable at the E3 gaming convention, and two additional ones that have been added for the Beta.

Specialists have returned for Black Ops 4 and players will be able to try out ten of them in the Private Beta. Here are all of the available Specialists and their unique traits and abilities.

Treyarch has posted all of the weapons that will be playable in the Private Beta online and on social media, and there will be one from each of the eight weapon classes.

Furthermore, the classic Pick-10 class system will be returning in Black Ops 4, and will be featured in the Beta.

Here are some of the weapons so far that we know will be available:

Stay in control while running and gunning.

A 4-round burst forward. Deliver long range precision with the Swordfish tactical rifle.

Reliable firepower with ammo to spare.

As of now, there is no official list of all of the available scorestreaks during the Multiplayer Beta. However, Treyarch did tweet out a short clip of some of the ones that will be at the players’ disposal.

The highly anticipated Battle Royale mode called Blackout will be available for Beta testing at some point in September, but the official dates for it have not yet been announced.

All those who have access to the Multiplayer Private Beta will also be able to play the Blackout Beta when it launches.