The high intensity Pool Play Qualifer for the $250,000 CWL Vegas event has concluded, and four teams have stamped their ticket to Pool Play.

The CWL Vegas Pool Play Qualifier tournament was a competition that featured the eight highest ranked teams so far in the Black Ops 4 season in terms of Pro Points, who had not already qualified for Pool Play automatically.

These eight teams competed in a double-eliminated, best-of-five bracket, with the final four teams standing stamping their ticket to Pool Play.

Str8 Rippin, Pittsburgh Knights, UYU, and Mindfreak survived the difficult tournament and earned qualification, with each team being designated to each of the four pools respectively.

Mindfreak have been placed in Pool A, UYU will have to battle it out in Pool B, Str8 Rippin are in Pool C, and PIT Knights have been given a spot in Pool D. 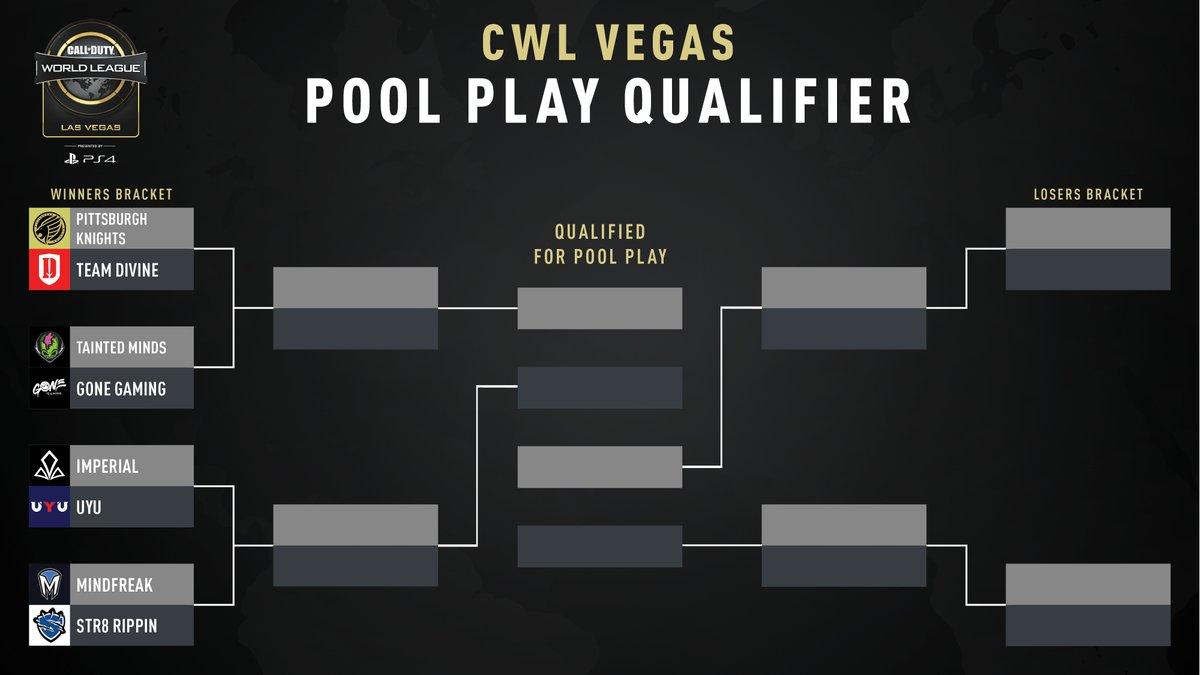 The official bracket for the CWL Vegas Pool Play Qualifier prior to the start of the competition.

The Play-In Tournament was as much of an intense and heated battle as advertised, if not more. The day started off with Str8 Rippin ripping off a 3-0 sweep of Mindfreak, while UYU came back from down 0-2 to defeat The Imperial.

On the other side of the bracket, Pittsburgh Knights fended off Team Divine 3-2, while Tainted Minds didn’t keep things as close as they destroyed Gone Gaming 3-0.

:projector:: @Proto626 wins the round for UYU on a misplayed 1v1 pic.twitter.com/7eaRrFWRj7

With the qualifying round of the Winner’s Bracket set, Knights defeated Tainted Minds 3-1 in the first matchup to earn qualification into Pools.

Str8 Rippin and UYU then faced off in the tightest and best series of the tournament, as UYU mounted another comeback from down 0-2 to tie things up at 2-2. The game 5 S&D went to a round 11, with Str8 Rippin managing to defuse the bomb with less than a second left to win the round and the series.

They close out the game 5 round 11 win over @UYU_GG to secure their spot in #CWLPS4 Vegas pools! pic.twitter.com/Eflg4hy4EK

In the Loser’s Bracket, Mindfreak made The Imperial pay for letting UYU come back on them, as the Australians won 3-0 to eliminate Imperial.

The other match featured Team Divine taking care of things vs Gone Gaming, wiping them out 3-0 to advance to the next round.

The second round of the Loser’s Bracket featured two winner-take-all matches, as the victorious teams would earn qualification while the losers had to try again through the Open Bracket.

UYU kept their strong play going with a 3-1 defeat of Divine, while the APAC powerhouse matchup between Mindfreak and Tainted Minds proved to be one-sided affair as Mindfreak took care of business 3-0.

The top two APAC teams faced off for the final Pool Play spot of CWL Vegas, and it was Mindfreak who got the better of rivals Tainted Minds.

With the Play-In Tournament completed, here are the updated Pro Pools for the main competition, with each Pool still having one more spot to fill with a team from the Open Bracket.

Pool Play at CWL Vegas is set to kick off at 2 PM PT / 5 PM ET on Friday, December 7. For more details about the $250,000 tournament, including the full schedule, live scores, live Pool standings, rosters, and more, visit our dedicated CWL Vegas hub.