Call of Duty pro Maurice ‘F3rocitys’ Henriquez defended the use of racial slurs during his stream, and hit back at those trying to make the incident “a big thing” on social media.

In since-deleted messages on Twitter, the inactive Team Envy member hit back at a post on the popular CoDCompetitive subreddit pointing out the instance using a clip of his September 2 Twitch stream.

After a game of Search and Destroy, Fero and his teammates were reeling from the tight 5-6 loss in the post-game lobby. After light banter, Fero shocked audiences by apparently using the word on stream.

While there was a ton of fan speculation in the moments after, the 20-year-old seemed to confirm the incident by hitting back at those that worked to “bring (him) down.”

“So funny how people try to make me saying the word ‘n***a’ a big thing,” Fero said in reply to the Reddit thread. “Meanwhile 99% of pros say it but everyone loves me a lot so they constantly try to bring me down. So sad. Sorry for saying it (in-game)”

While he apologized at the tail-end of his message, he followed up the response with another account detailing why he believes some Call of Duty pros never seem to stream themselves.

“I realized why some pros never stream,” Fero said. “Because what’s the point. It’s like I’m getting arrested 24/7 by ‘supporters’ who I’m trying to provide entertainment for… Anything I say can and will be used against me, sorry officers!” 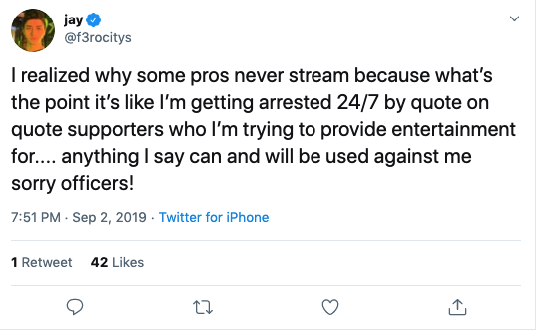 While the second message was made in support of his initial response to the backlash, the Call of Duty pro quickly took down both messages.

This isn’t the first time the young pro experiences backlash from using a racial slur. Previously, clips from 2016 surfaced in which Fero can be heard saying he would never play with “fucking n****rs again.” He later apologized for the resurfaced video.

Fero hasn’t had the best 2019 season, according to his reflection about his time on the 100 Thieves and Team Envy rosters.

The pro is hopeful that he will “get picked up by a franchised team” in the upcoming Call of Duty competitive season.