The bonus content of the Call of Duty: Black Ops 4 Specialist Edition has finally been revealed.

This special edition of the upcoming title will feature the game along with five in-game bonus items and one piece of merchandise.

Although the Specialist Edition was announced earlier this year, the bonus content was never revealed and simply listed as “to be announced.”

Now, GAME UK, one of the retailers that will be carrying this version of the game, has revealed what the additional content will include. 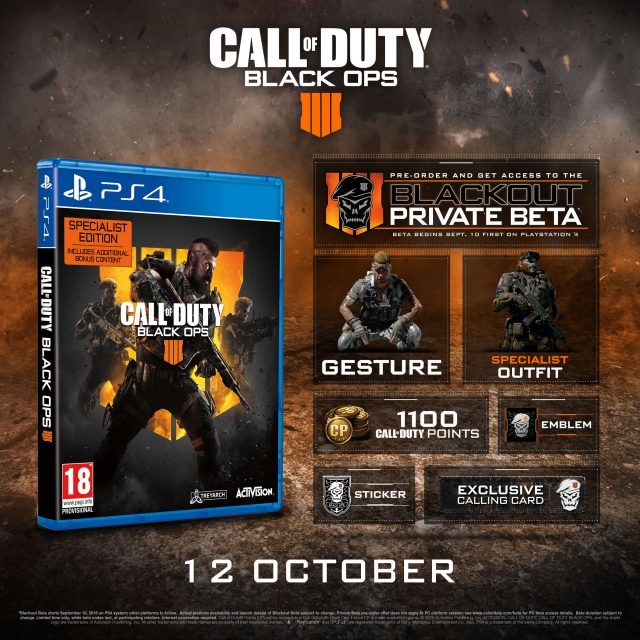 In addition to the five in-game bonus items, the Specialist Edition will also come with a special sticker.

Also, for anyone who pre-orders this version, or any version of the game, will also be given access to the Blackout Private Beta, which will launch on September 10, first on the PS4.

It is not clear whether the bonus Specialist Outfit is for one Specialist or several, as Treyarch have not really gone into detail about how the cosmetic side of Black Ops 4 will work.

Furthermore, this is the first true piece of evidence that gestures will be returning this year. While Black Ops 3 featured a multitude of different Specialist gestures, it was never confirmed that the animations would be returning for this year’s title.

The Black Ops 4 Specialist Edition is available in only select regions, including the UK, Australia, and Canada. It appears that the US equivalent of it will be the Pro Edition, which is also currently available for pre-order.