The 2XP promo will be activated in both the Multiplayer and Zombies modes, giving players a solid opportunity to rack up their XP points and level up.

The promo will also offer a 2X boost to Merits in Blackout, which are essentially experience points needed to level up the Echelon ranks and unlock rewards, such as new playable characters.

News of this 2XP and 2X Merits promo was announced last-minute on December 13 via a post on the official Treyarch Studios Twitter page.

Surprise! Starting tomorrow at 10AM PT, we’re kicking off the holiday season right all weekend long in #BlackOps4:

As for the new game mode in Blackout, it will be called ‘Close Quarters Frenzy’ and be very similar to the mode with the same name that was enabled during the beta testing phase of the battle royale in September.

For those who did not play the beta, or do not remember the mode, Close Quarters Frenzy features a faster moving Collapse (gas) and the only weapons available are SMGs, shotguns, handguns, and fists.

This speeds up the game considerably, and forces players to engage each other much more closely, rather than the usual long distance encounters in the regular modes. 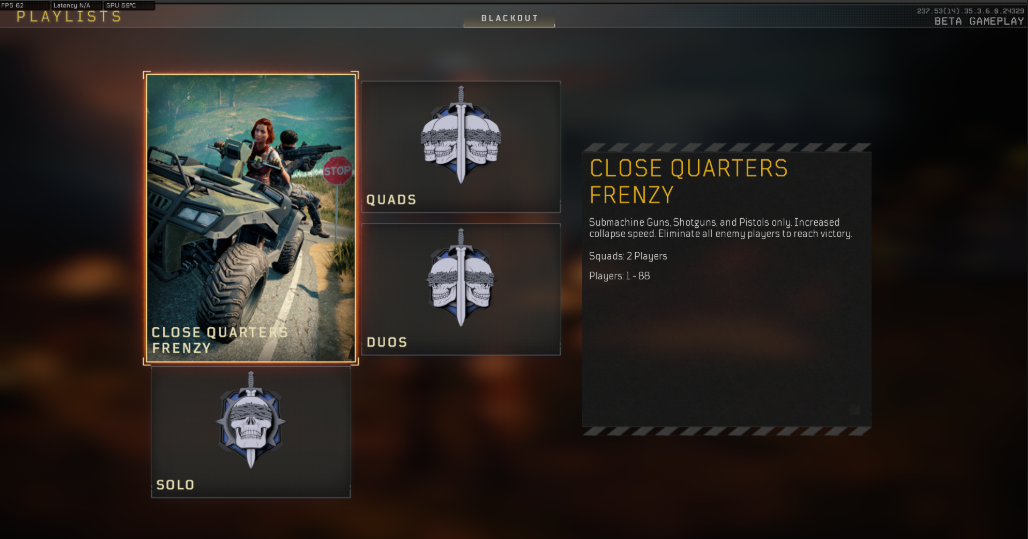 It’s not yet clear whether the Close Quarters Frenzy that will be enabled this coming weekend will be identical to the one from the beta, so players will have to wait until the mode goes live to see what changes have been made, if any.

Regardless, with these promos and all of the other new winter and holiday themed content that has been recently added, it’s set to be an action-packed weekend for all three modes in Black Ops 4.