Warzone
The latest Call of Duty: Warzone’s tournament is now in the books, as FaZe Swagg’s Summer Warzone Invitational took place on August 17 with a tremendous cast of high-profile streamers.

Swagg is one of Warzone’s most popular streamers and one of the hottest stars of 2020. He’s a finalist for the Esports Awards Streamer of the Year and even a Warzone World Record holder. Not only that, but he’s a proven competitor, having recently won $100,000 Toronto Ultra Warzone tournament alongside NICKMERCS and DiazBiffle. Now, he’s shifted to hosting his own event with an Activision-partnered $25,000 single-day Duos tournament.

Featuring some of the biggest names on Twitch and many of the most popular Warzone personalities, the Summer Invitational took over Twitch on August 17. The fierce competition ran for roughly 5 hours and we’ve got you covered with a full recap below.

With many familiar faces battling it out in the latest Warzone event, competition was as fierce as ever. Duos had a full three-hours to make their mark and dominate Verdansk. Some teams got off to a hot start with high-kill wins right away. Meanwhile, others took a while to get going but soon found their rhythm with back to back victories. The lowest score any team put up was still quite significant with 165 points coming from jSmoothHD and colorss95.

Notable names were knocked out of contention early on as even the likes of Swagg found himself eliminated from his own tournament. Alongside NICKMERCS, the duo fell to 17th place overall with 169 points to their name after three hours. Cracking into the top eight was an extremely tight battle with six teams all finishing within 30 points of each other.

Ultimately, the second portion of the event saw duos like previous event winners HusKerrs and Symfuhny taking on Nadeshot and Exzachtt head to head. With just two games in this phase, the intensity ramped up a notch but it was Aydan and MuTeX squaring off against Tommey and AlmxndTV in the grand finals.

The former found a lead in the first map, closing out an overall win to boot. The second round could not have been closer, however, as the gap began to close and just two kills separated the teams at various stages. Aydan and MuTeX were able to keep this two kill lead moving forward. Eventually closing out the event as the overall winners as Tommey and AlmxndTV went down.

Who competed in the Summer Warzone Invitational? 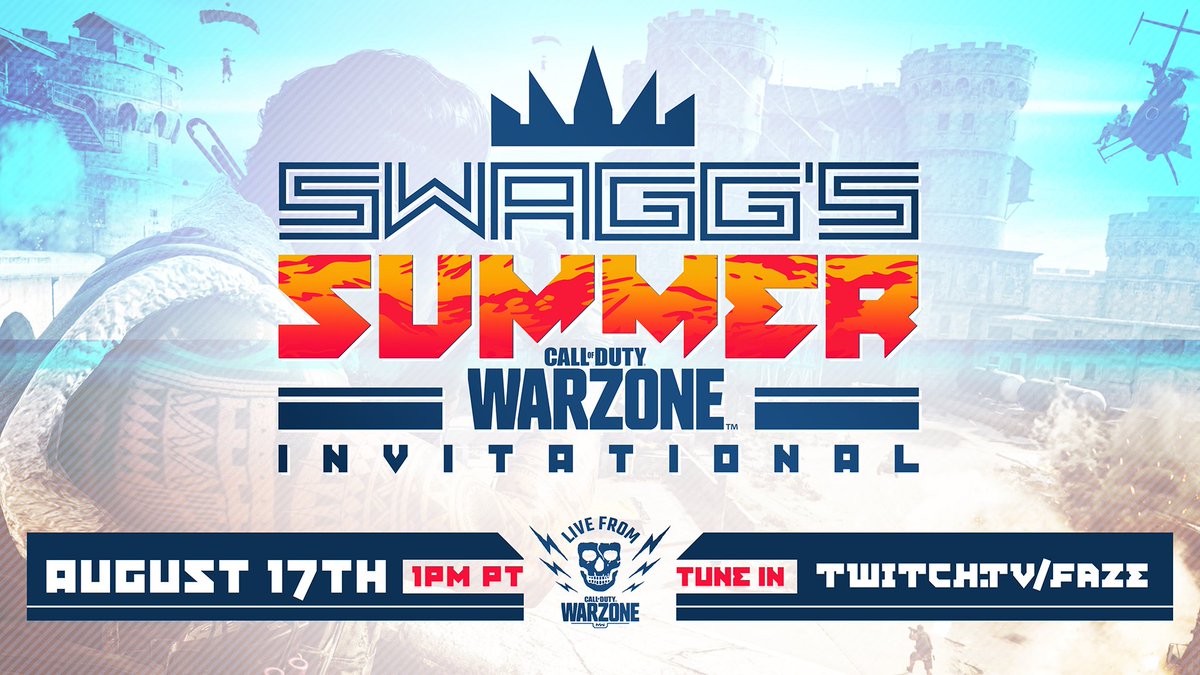 Swagg competed in his own tournament with NICKMERCS as the duo looked to regain their form after a tough performance at the $15k TeeP’s Trials Warzone tournament. But they were also joined by various other renowned players and streamers.

Among those competitors, the aforementioned TeePee made an appearance as well as two of FaZe Clan’s other top players: FaZe Blaze and FaZe Pamaj. Rounding things out, accomplished competitors like Aydan, Vikkstar, and DougIsRaw were also in attendance.

Things are heating up for a #SwaggSummer in Verdansk…

Join us in welcoming the first group of players dropping in for @Swagg's Summer @CallofDuty Warzone Invitational this Monday, August 17th! pic.twitter.com/KN1Zvy6kGb

FaZe Swagg’s Warzone event was broken into two unique sections. The first half of the tournament saw teams battling for a spot in the top eight in order to advance through. It was a three-hour kill race in which their five best games were taking into consideration. Duos could drop in as many times as they liked throughout this three-hour window but ultimately it came down to who had the best performances on average.

Transitioning to the second stage of the event placed the top eight teams into a single-elimination bracket. From here, competition became even more intense as duos were forced to pair up with other duos and drop into the quads playlist. Teams would play two games in the same lobby and the duo with the highest kill count overall then advanced through the bracket. This format continued until a winner was crowned in the grand final showdown.

For viewing of the event, fans were able to tune into FaZe Clan’s Twitch channel for overall coverage that started at 1 p.m. PT. However, individual streamers were also sharing their POVs throughout the competition. We’ve embedded a few broadcasts below for your convenience.

With Infinity Ward deploying an emergency patch to fix the infamous “demon glitch,” guns were fixed for this tournament and did not appear as corrupted graphical monstrosities.

This was a welcome sight for fans, but an even better change for the sanity of the Swagg Summer Invitational’s competitors. Keep your eyes peeled for future announcements as the success of this initial event is likely to see more coming soon.