The 100 Thieves Call of Duty team confirmed their final two members on September 26, but not everyone was impressed.

WWII world champion Patrick ‘Aches’ Price has been on something of a rampage since winning CoD Champs 2018 in August, and has made sure everyone knows that he’s currently on top.

After roasting Donny ‘Temp’ Laroda for a Tweet he made over a year ago, he turned his attention to the new 100 Thieves roster.

While praise was heaping in on the team, Aches decided to make his feelings very clear, and pointed out two of their best players had failed to make any impact at CoD Champs.

The discussion began when former pro, Anthony ‘NAMELESS’ Wheeler, heaped praise on 100 Thieves for picking up Octane and Slasher to play side by side.

Aches clapped back and claimed NAMELESS must be smoking something.

NAMELESS and Octane responded, and Aches doubled down by saying from what he saw during the Black Ops 4 Beta, he wasn’t impressed. 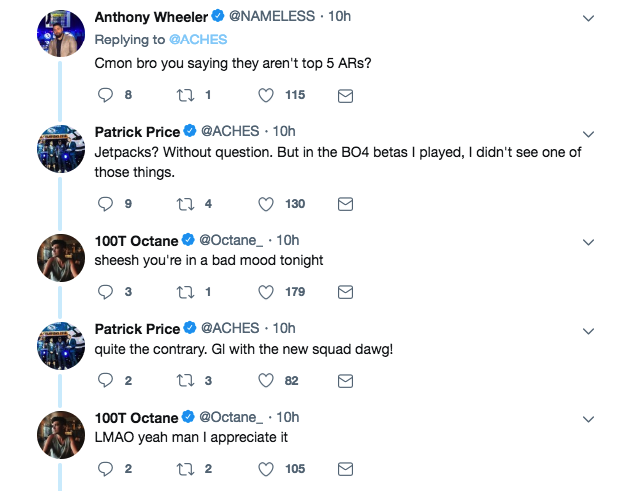 Could the trash talk come back to bite Aches or will this put more pressure on 100T heading into CWL Vegas?

attention in pool play for the first event of the Black Ops 4 season in December.