The roster move was formally announced late on September 26 via a post on the 100 Thieves Twitter page, with CEO Matt ‘Nadeshot’ Haag further confirming with his own tweet.

SlasheR and Enable join a roster that is already stacked with talent, including the likes of Kenny ‘Kenny’ Williams, Maurice ‘Fero’ Henriquez, and Sam ‘Octane’ Larew. 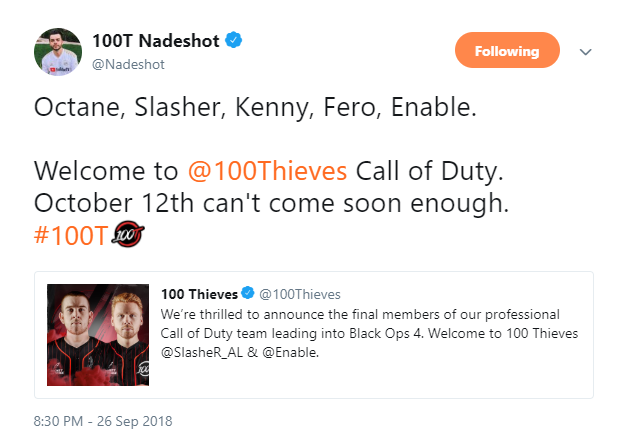 With the addition of Slasher and Enable, the new five-man roster for 100 Thieves is complete, as the org is looking to get back into the competitive Call of Duty scene for the first time since a brief and unsuccessful stint in 2016.

Per CWL rules for the upcoming season, this means that 100 Thieves will be more than likely guaranteed a spot in pool play of CWL Vegas, the first official event for Black Ops 4.

Although both SlasheR and Enable had difficult starts to the WWII season, with Team EnVy and Evil Geniuses respectively, the pair left their orgs to join new teams and have a much stronger second half of the season.

SlasheR finished the season with Rise Nation, winning both CWL Seattle and CWL Anaheim, before placing second at the Stage 2 Playoffs.

Enable, who joined Team Kaliber for the final three events of the season, placed first at the Stage 2 Playoffs and made it all the way to the Grand Final of the 2018 CWL Championship, losing out to his former Evil Geniuses team.

Keep updated on all of this off-season’s roster moves and team changes by visiting our dedicated Rostermania hub here.