Team EnVy captain Patrick ‘ACHES’ Price has a long memory when it comes to competitive Call of Duty, and he demonstrated it by calling out Echo Fox player Donny ‘Temp’ Laroda about a prediction he made almost a year ago.

In October of 2017, ACHES made a sarcastic remark about Temp and Rise Nation’s Austin ‘SlasheR’ Liddicoat winning a throwback ‘boots-on-the-ground’ tournament while he was out of town.

“Hold up man, I leave the country for a week and Donny and Slasher win a boots throwback?” he tweeted. “Man, I can’t really take anymore vacations.”

Temp and SlasheR, who were both on EnVy at the time, bit the bait and took exception to the comments, starting a war of words that went back and forth on Twitter.

At one point, ACHES hit SlasheR with the classic “let me know when you’re a boots world champion” line, to which Temp replied with a prediction that SlasheR, and thus himself as well, would become champions that very season. 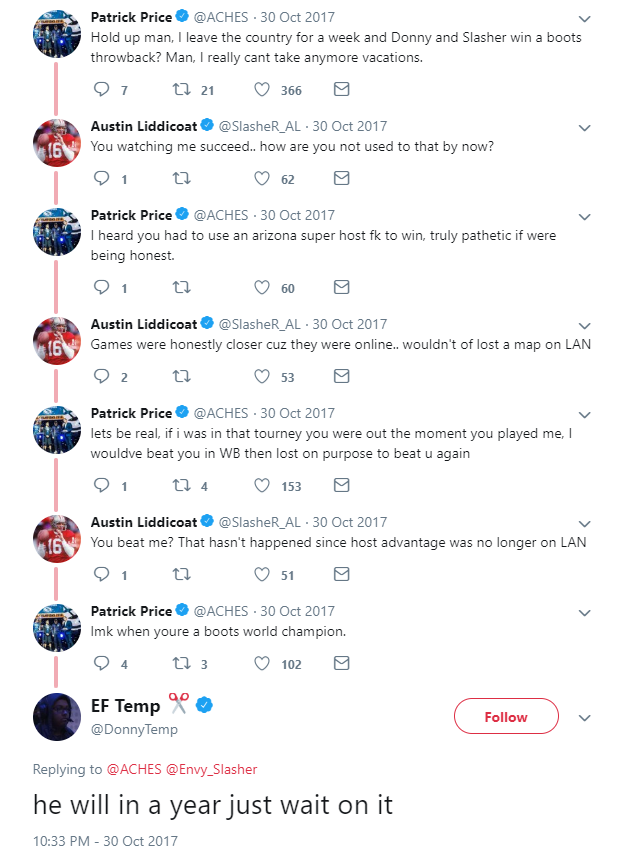 It’s safe to say that Temp’s tweet has not aged well; after largely unsuccessful spell as a member of EnVy, he moved on to Echo Fox, where he finished 17-24 at Champs.

SlasheR, who eventually left EnVy for Rise Nation, had a strong end to the season, but his team also underachieved at Champs, finishing 13-16.

Of course ACHES, whose Evil Geniuses went on a Cinderella story run to win the 2018 CWL Championship, was not going to let the opportunity slip by to remind Temp of his failed prediction.

It’s not clear whether ACHES really did have Temp’s tweet in the back of his mind this whole time, or perhaps he had set some sort of reminder to go back to it a year later.

Regardless, if the two-time World Champion has a chance to prove somebody wrong on social media, he almost never fails to disappoint.