There are a lot of places to land on the new Apex Legends: Season 3 map World’s Edge, and Reddit user ‘6acee’ has determined which locations are the riskiest options.

Noticeably bigger than its predecessor King’s Canyon, the new World’s Edge map offers a lot of choices when it comes to deciding where to land at the start of a match, each one having its own pros and cons.

As is the case with most battle royale maps, some of these locations are more dangerous destinations than others, mainly because they are popular landing spots, also known as ‘hot drops,’ and the chances of running into a team and dying early are heightened.

With that in mind, 6acee generated and posted a hot-spot map on Reddit showing which points-of-interest are riskier than others.

He deems the red locations to have the highest risk, followed by orange, yellow, and lastly green, which has “insanely low risk” attached to it as a landing spot. 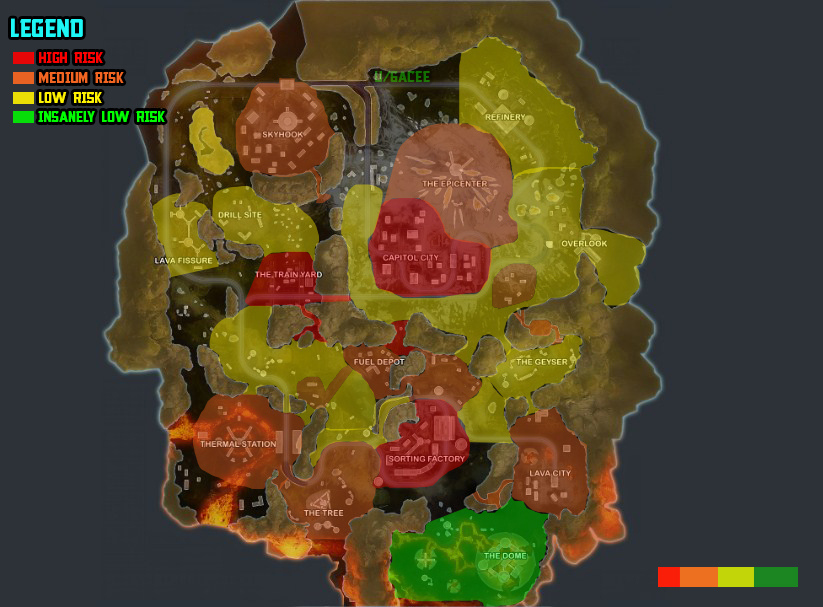 A hot-spot of the Apex Legends Season 3 World’s Edge map.

The player considers Capitol City, Sorting Factory, and The Trainyard to be the most dangerous POIs, mainly due to their loot and location.

Take Capitol City for example – it is a sprawling metropolis that not only has a lot of good loot to offer, but is also very central on the map, meaning that wherever the circle starts out for that match, CC won’t be far away.

However, with high risk comes high reward, and if your team lands at these places and plays together, loots properly, and wins early gunfights, it could set you up for a very good match. 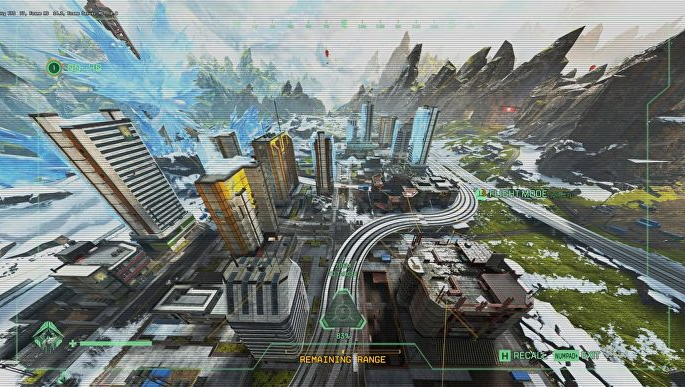 Capitol City may be the most popular spot on the Apex Legends map, which is why it’s the riskiest to go to.

The Dome has “insanely low risk”

The creator of the hot-spot map made sure to designate The Dome as the only named location to have “insanely low risk,” and this is because it is essentially has the opposite qualities of the riskier POIs.

Being located on the deep southern edge of the map means that not a lot of teams like to land there, so it can be the ideal landing spot for those who want to avoid early engagements as much as possible.

However, there’s a reason why no one likes going there and it’s because of how skewed its location is, and any ring that starts towards the northern half of the map can lead to a very drawn out rotation. 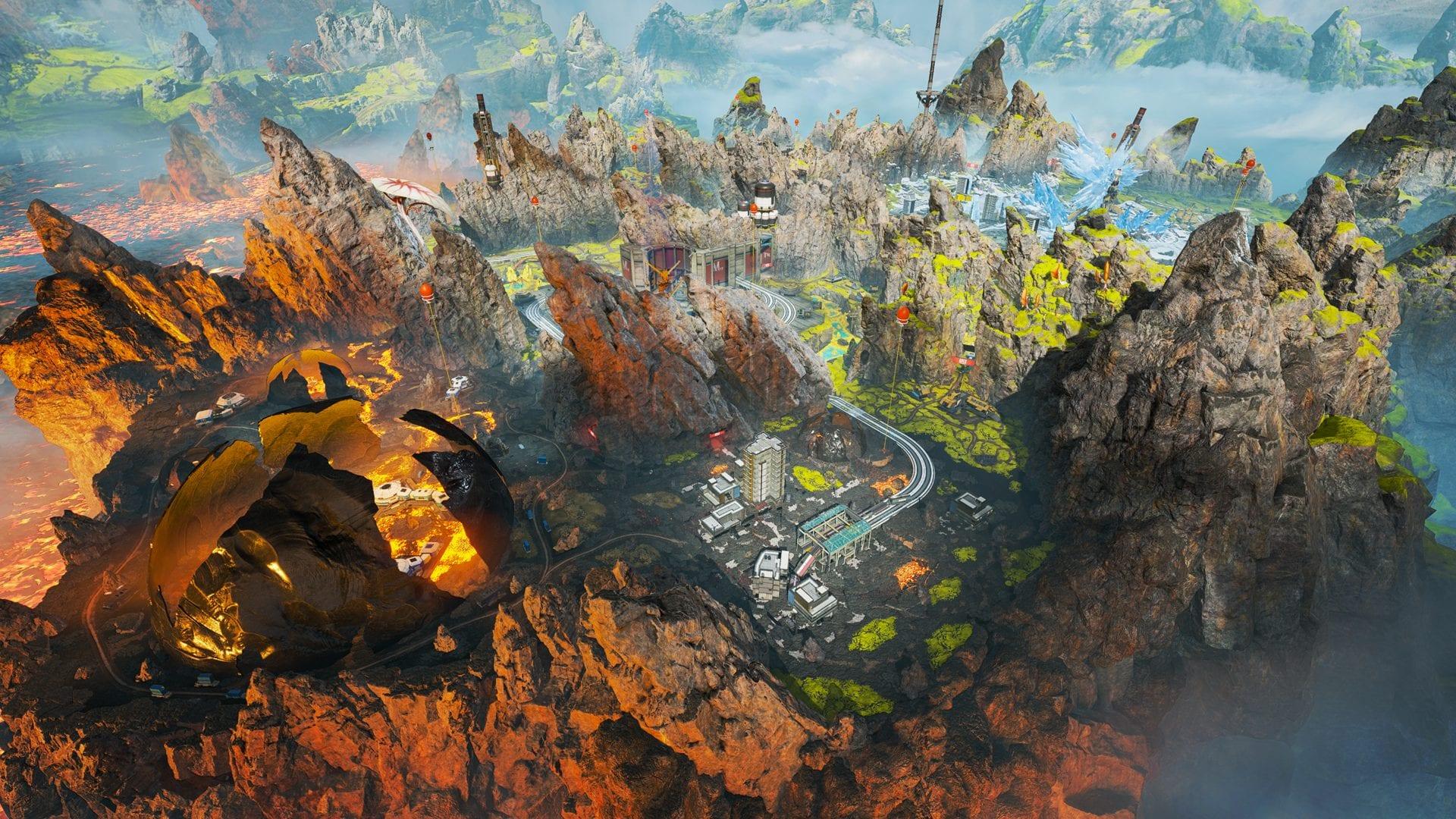 Less-popular locations on the Apex Legends map are certainly also less risky to land at.

Below, you can read the Redditer’s full post on the hot-spot map and some tips and tricks that can help players navigate difficult areas on the map.

Hey guys It’s your friendly neighborhood apex player 6acee. Today I made a hotspot map and will explain a few quick tips on each location highlighted. I’ve seen a lot of people talk about how the map isn’t working for them, or they aren’t getting the kills they used to get in King’s Canyon and I’m here to show you why !

Capitol City: In my opinion one of the most popular spots currently on the map, multiple buildings, a lot of loot and A LOT of enemies. The thing people lack on this area is teamwork. Either they run around to every building alone to be the first to grab loot or they try to third party alone. STICK TOGETHER. It’s the only way to come out of Capitol City and survive.

The Trainyard: CHOO CHOO do you hear that? It’s the train of enemies that’s about to run you. If you don’t want to end up as a banner chip, stick with your TEAM. Focus on looting together in a wave, and stay CLOSE TO EACH OTHER.

Sorting Factory: The amount of loot bins and loot piles in this area make this a perfect drop. Once again, stick together and loot as a tsunami. If successful you will come out of there stacked and ready for the endgame.

The little tower in between CC and FD: If you see a enemy team setup at the top, don’t even try to contest unless you have a gibraltar/bangalore with their ult, or a s*** ton of grenades. You will lose 80% of the time if you try to contest otherwise.

Skyhook: The amount of buildings in this area make it a beautiful drop. Reason it’s not a high risk is because most of the time Skyhook is never in the circle, so what happens is people forget about the time or is distracted fighting a squad and by the time they finish looting they’re already in the ring. PAY ATTENTION TO THE TIME

The Epicenter: Epicenter is highlighted medium risk because of the amount of people that rotate there for a few loot bins coming out of Capitol City. Quickly loot up and either run towards Refinery if it’s in the ring, or play smart and third party at CC.

Lava city: If it’s your lucky day, you’re getting in that vault and being stacked. Cargo Drone flies around LC. You will always clash with another squad in LC, I recommend rotating towards The Geyser if you survive that is 🙂

Fuel Depot: It’s that sweet scratch spot everyone loves when they finally get it. The amount of options and plays to do if you have a perfect drop makes it amazing. You will always see another squad landing with you, but if it’s your lucky day you’ll be stacked.

Everything colored yellow is NO MANS LAND. You will ALWAYS see enemy’s rotating in these areas 100% of the time. Lava Fissure, Drill Site, The Geyser, Overlook, Refinery are areas people in ranked fly in for a safe drop. You will always be the only squad in that area or will have to duel with another.

In my opinion the most safest areas of the map. You will almost never see enemies rotating in these areas. The Dome will either be looted by a squad that headed to Lava city or Sorting Factory or your squad will be the first there.