One dedicated Reddit user has shared their incredible legend concept, Ember, a Pyromaniacs Mercenary who would fit right in to Apex Legends’ upcoming sixth season.

When it comes to gaming communities, few can match the innovation and dedication regularly demonstrated by the Apex Legends community. Cosplays and skin concepts have become the norm, with fans regularly flexing their creative muscles.

This trend was continued on July 25, with one fan sharing an incredible concept for a brand new Legend, known as Ember. The character is pitched as a ‘Pyromaniacs Mercenary’ with the tag line: “Your little thermites don’t scare me; I’ve walked through fire more times than you could imagine.”

Could you see Ember joining the Legends pool?

A description accompanies the incredible concept art, giving background and lore to the conceived character. Despite being shared by a different Redditor, full credit for the post can be given to @Trash_Senpaiii on Twitter and Instagram, who also gave us permission to share her work.

“Ember was a mercenary pilot hired by the IMC during the final years of the frontier war,” the post reads. “During one unfortunate mission, Ember’s squad was ambushed and bombed… she made it out with parts of her body badly burned.”

Following this incident, Ember transitioned over to the Syndicate, with whom she still operates. Her current mission is to destroy evidence of the “unethical experiments” that took place in King’s Canyon. 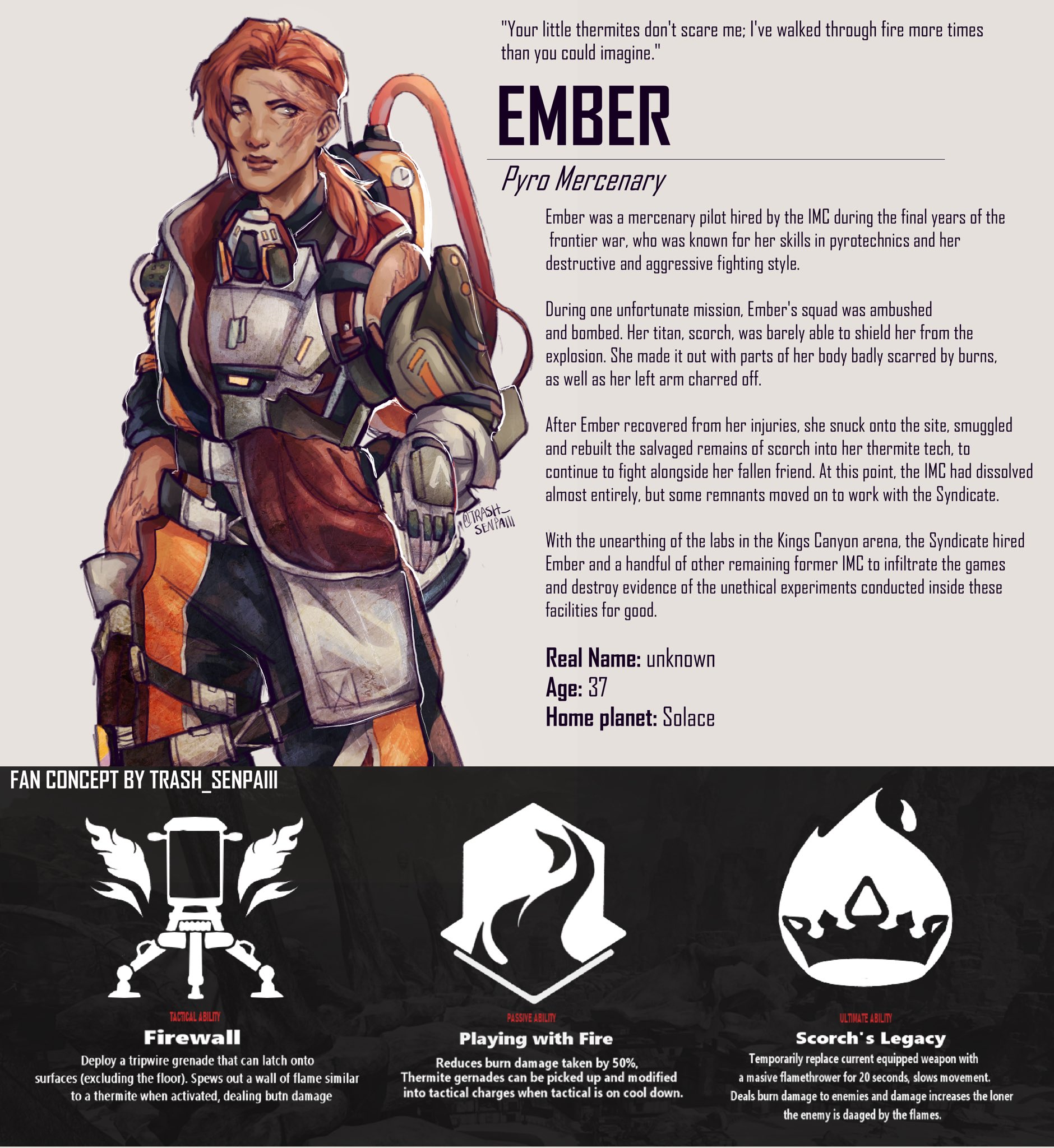 I wanted to hop on the #apexoc train and make one too! (Was really nervous about sharing this haha) pic.twitter.com/qLX1jq51d7

Away from the lore and background of Ember, we were also given a look at what abilities she might possess. Her Tactical is known as Firewall, and would see her able to deploy a ‘tripwire grenade’ which would deal burn damage when triggered.

Her Passive ability would be called ‘Playing with Fire’, and mean she takes only 50% burn damage from enemy thermites. Finally, her Ultimate is called ‘Scorch’s Legacy’, which would replace her equipped weapon with a flamethrower for 20 seconds. This sounds incredible.

We’re of course biased, but we’d love to see Ember grace Apex Legends with her presence. Whether Respawn will add support for fan-made creations to make their way into the game remains to be seen, but this awesome creation is very high up our list.