Players are getting frustrated with a specific looting mechanic that exists in Apex Legends, and want developers Respawn Entertainment to add in an option to disable it.

The launch of Season 3: Meltdown in Apex Legends has breathed popularity back into the battle royale title, as many have hopped on the game to try out the plethora of new content.

However, one thing that the new season has not done is deal with a specific looting mechanic that has a lot of players annoyed.

When a player is looting through the inventory of an eliminated enemy and they get shot at by someone else, the menu automatically closes so that they can take action as quickly as possible.

In theory, this makes perfect sense, and would actually be a very good thing, except for the fact that most players instinctively press a button to exit out of the inventory when taking damage, and that ends up leading them right back in because the menu had already closed by default. 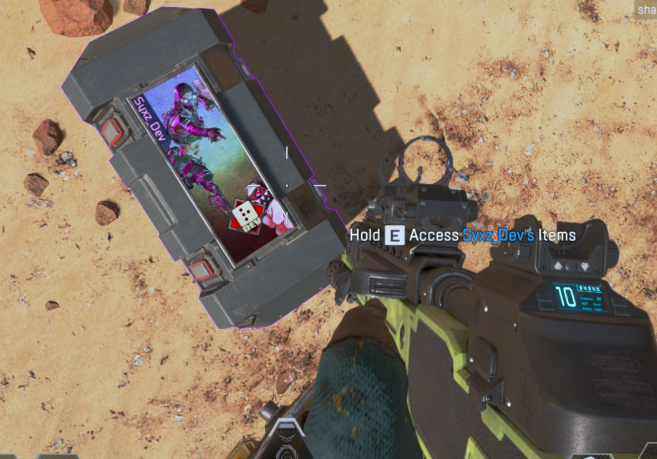 Looting can be a dangerous thing to do in Apex Legends, especially with the menu auto-close feature.
[ad name=”article3″]

Ultimately, this leads to a frustrating experience, as the player then spends an extra few seconds having to exit the screen again, and if they take further damage during that process, there is a good chance of it all happening again, and again, and again.

As a way to combat this potential situation, Reddit user ‘GFHeady‘ has proposed a possible solution that would probably have everyone satisfied.

He posted a concept image of an option in the menu that would give the player the choice of not having a loot menu close when taking enemy damage, which would then allow them to manually exit, as they’re muscle memory has already been set to do.

A feature almost everyone is asking for. from r/apexlegends

While titling his post “a feature almost everyone is asking more” may be a bit of an overstatement, it does seem to be a very popular idea, judging by the comments on Reddit.

“The amount of times I’ve been shot at, kicked out of the menu, but hit tab real quick to get out, but then I’m in my inventory and getting shot at even more,” wrote ‘ZaynPlease.’ “I need this feature more than I need to get good.”

“Every single time I hear gunfire, I automatically exit the looting screen,” added ‘nattfjaril8.’ “But since the auto-exit kicks in at the same time, I end up back in the looting screen. Rinse and repeat until dead. I wouldn’t mind it if getting shot at cancelled looting, if there was some kind of delay before you could start looting again, so that this didn’t happen.” 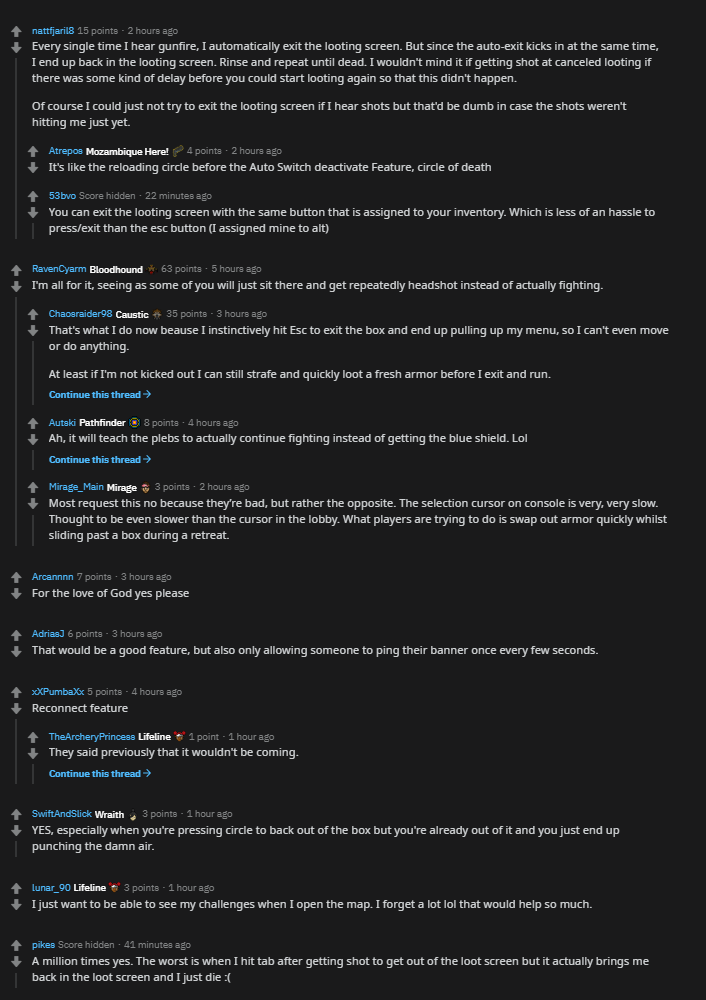 It would seem that adding such an option wouldn’t really hurt or change the game in any negative way, and would only add something that many players apparently deem important and are asking for.

Considering how popular this post has gotten on Reddit already, it may not be before too long that someone on the development staff at Respawn catches wind of it and puts it on their to-do list.