An Apex Legends fan has developed a concept that would make it easier for players to join and participate in social groups while in the game.

There are plenty of features that Apex Legends fans would like to see implemented in the game, and while many prioritize gameplay elements like new playlists and custom games, others would simply like it to be easier to socialize.

Apex Legends has a basic friend system, but doesn’t have any means of tracking particular groups, or building communities of people to play with. For the most part, it’s only possible to really interact with two other people at a time, and no way of linking a larger group of friends.

Networks allowed players to create and join social groups of players, making it easier to group up and encouraging playing together, while also enabling larger communities to identify themselves with clan tags. 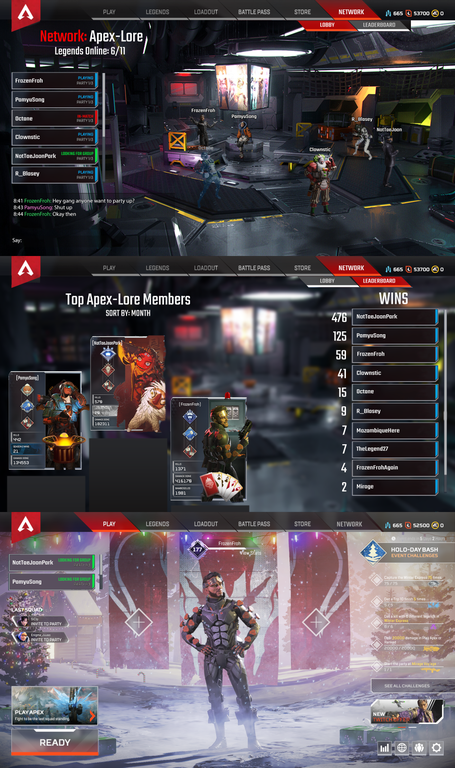 FrozenFroh’s concept would offer players a means of communicating with more than just the two players in your squad without having to use a third-party platform, as well as a looking-for-group feature that would inform those in your Network that you’re putting together a squad.

This would help streamline the process of grouping up, reducing the need to manually message or invite multiple players in the search for available teammates, while also allowing for a greater amount of social interaction beyond the three people in a squad at any given moment – both issues that can be even more pronounced for those with extensive friends lists.

Whether Respawn will ever develop a system like this remains to be seen, however. CEO Vince Zampella recently stated that the developers didn’t plan on competing with Epic’s plans to turn Fortnite into a “social platform”, which involves offering a variety of creative tools, but a more simple system like this inspired by one of Respawn’s own games may not be out of reach at some point in the future.