An Apex Legends developer has responded to players’ complaints about bringing back old LTMs (limited-time modes), rather than adding new ones. His candid response shed some light on why Respawn continues to “recycle” LTMs and the effort that goes into perfecting them.

The debate surrounding Respawn’s continued use of recycled LTMs is not a new one. Certain members of the Apex community continue to voice their issue with the lack of all-new LTMs being added to the game.

Although there are have been numerous different limited-time modes since Apex released in 2019, Respawn brings back fan-favorites such as Armed & Dangerous and Always be Closing on a regular basis.

Although these modes are generally well-liked, some have assumed that they are recycled as a low effort means of adding ‘new’ content. However, senior game designer Daniel Klien has explained the team’s thinking.

‘Winter Express’ is the LTM returning with the Holo-Day Bash event.

Complaints surrounding LTMs on the Holo-Day Bash announcement thread led to a response from the dev. A number of players had expressed their disappointment that ‘Winter Express’ was just another “recycled” mode.

But, the game designer outlined the amount of effort that had gone into perfecting and reworking the ‘Winter Express’ mode: “between the supply ships and the new stations and a LOT of behind the scenes changes to reduce downtime it feels so much better to me.”

Despite the response, this only led to comments stating that ‘Winter Express’ was still a recycled LTM and that no new content had been added.

This led to an extremely candid statement from the developer that revealed the exact reason Respawn choose to bring back fan-favorite LTMs: “Real talk… everyone ASKS for game modes but looking at our numbers, it doesn’t seem like people play them nearly enough for us to put in the amount of effort required to make a new mode.” 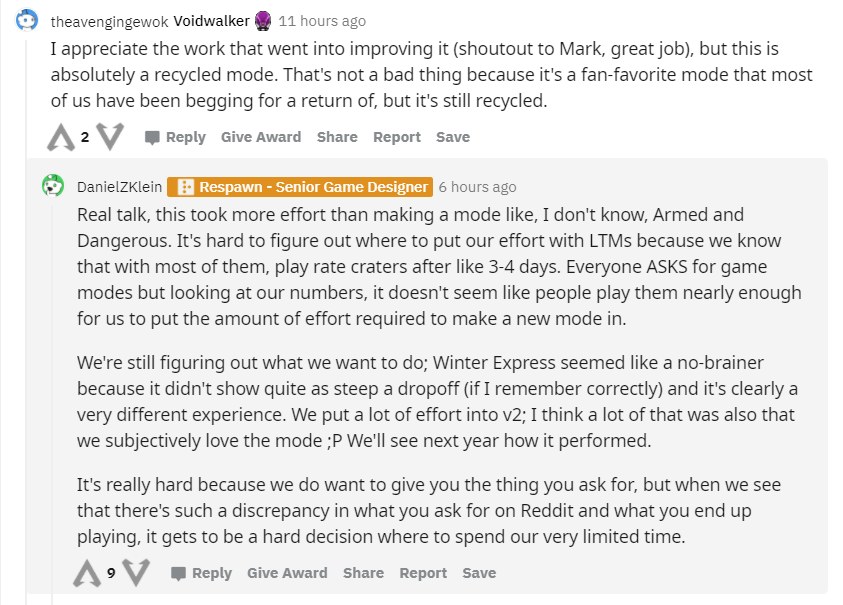 This certainly offers some context to the debate surrounding “recycled” LTMs. If the player numbers don’t justify the resources needed to make a new LTM,  then why would Respawn continue to produce them?

LTMs are popular for a short period of time before players head back to the main modes.

It’s often difficult for developers to grasp what content a player base is looking for. Although social media can be a good indicator, it often only represents those who shout loudest, rather than the entire community.

Respawn devs remain very active and engage with players about issues, so feedback should always be encouraged.

An Apex Legends developer has responded to a frustrating bug that is crushing players in corners in the Winter Express LTM.

With the holiday season fast approaching, game developers across the globe are racing to get their updates in so that players can celebrate while also playing their favorite games. In the case of Respawn, the Apex Legends dev have brought back the Holo-Day Bash event as well as the Winter Express LTM.

The popular limited-time mode is pretty simple, with players battling in tight spaces, and with random loadouts, to take control of the train that used to chug around World’s Edge.

While it is incredibly fun, there are a few issues cropping up – with the biggest one, this time around, seeing players being crushed when they go near certain corners or interact with a teammate. 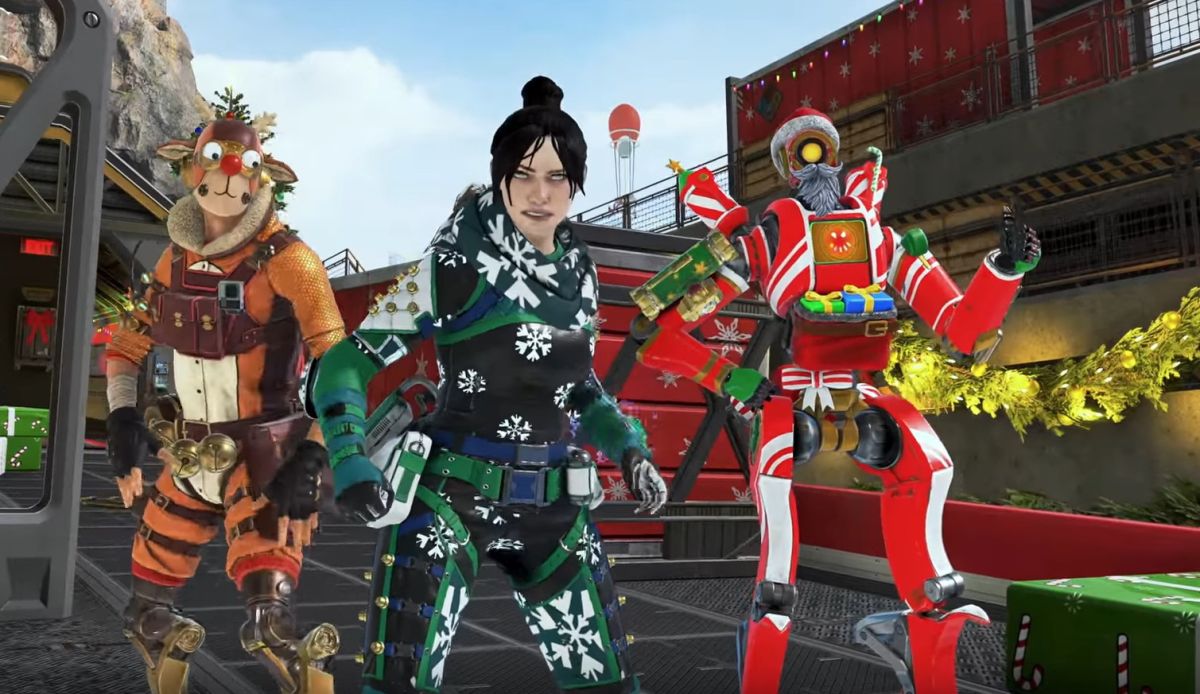 Anyone who likes to get their teammates a friendly punch will have noticed the issue, but Apex Legends player blinnddd was confused at first – asking if it was a bug or an intended consequence of getting their teammate a tap.

Plenty of players quickly responded to say it was an issue before Daniel Klein – a Senior Game Designer at Respawn – chimed in to confirm it’s a problem, but it’s not exactly a simple one to get ironed out.

“F**king moving geo 🙁 Yeah, it’s a bug, but not an easy one to fix, he commented shortly after the post went up on the Apex Legends subreddit. “Hope that was in the grace period!”

Additionally, the problem has been flagged on Respawn’s public Trello board of Apex Legends issues, but it’s purely in the investigating phase for now.

The Holo-Day bash event, and the Winter Express LTM, are set to run until January 4, so there is plenty of time to get it straightened out, but as Klein notes, its not an easy one. So, we’ll just have to wait and see.