Apex Legends weapons - What are the best guns and where to find them? - Dexerto
Apex Legends

Apex Legends weapons – What are the best guns and where to find them?

EA’s Apex Legends has been available for a week now. Consequently, the player base is getting better and any advantage you can find is paramount. One way to get ahead is with better weapons. Here are the best weapons on Apex Legends and where to find them.

As with all games, the standard of gameplay gets better over time. The same has been happening with Apex Legends.

Good shooting by itself no longer cuts it against a superior weapon and armor. Therefore, it’s imperative to give yourself the best chance of winning a gunfight. The best way to do this is by finding the best guns on the game.

What are the Best Guns?

With the intention of keeping this information concise, the best gun from each type will be highlighted. This list is by no means definitive as different players have different styles which result in varying choices. However, the following guns are generally considered the better weapons in Apex Legends.

Before we list the best gun in each class, here are the two best weapons on the game. Naturally, both are only available in air drops. Other guns are found throughout King’s Canyon (the Apex Legends map).

Simply put, the Mastiff is devastating. Per pellet the Mastiff does 18 damage to the body and 36 to the head. Respectively, if all pellets hit the target this will cause 144 and 288 damage. This is enough to one shot an opponent to the body if they only one bar of armor and will always kill an enemy to the head. It comes with 16 rounds of ammo.

For those who have yet to experience the Kraber, think of PUBG’s AWM. It does an often deadly 125 damage to the body and 250 to the head. If you’re accurate with it, then you’re going to win the fight.

Unsurprisingly, the Kraber has the best damage stats in King’s Canyon. The gun comes with a 6x-10x variable optic by default. Beware though, it only comes with eight bullets, so use them wisely! 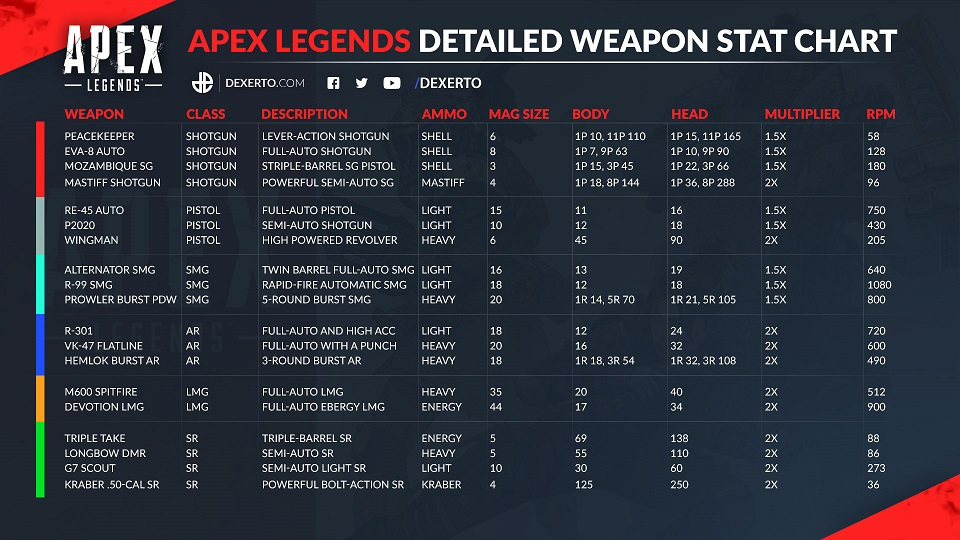 The spitfire’s decent rate of fire, along with a sizeable 20 and 40 damage to the body and head, make it a good all round weapon. In comparison to the other LMG, the Devotion, it uses heavy ammo and has 35 in a clip (Devotion has 44).

The high DPS of 80, coupled with lower bullet drop because of the ammo, means it’s relatively effective at both long and short range.

Essentially the best SMG comes down to whether you prefer automatic or burst fire. If you’re proficient with a burst weapon, then the Prowler is going to be effective for you.

Its five-round burst means if you are accurate then enemies are going to struggle to beat you. Unfortunately the recoil after each burst is pretty substantial. Nevertheless, without this kick back the gun would be overpowered.

Another burst weapon, so it may not suit some players. If you can handle, or even like a burst weapon, then this is arguably the best AR.

Much like other burst weapons, this gun rewards accuracy. In comparison to the SMG Prowler burst weapon, it also has less recoil and an increased multiplier for headshots.

More so than the other types of gun, the best assault rifle comes down to gameplay style and opinion. The R-301 offers a good blend of mobility and ease of use.

While the damage may be on the weaker side, its low recoil and the fact it utilizes light ammo makes it a basic, yet solid gun. For those who are new to the game and need a gun to pick up and use without hassle, the R-301 is the best gun for you.

As the Kraber is so rare, a lot of Apex Legends players will be wondering what the best sniper rifle alternative is. In terms of damage, which is primarily what a sniper rifle is judged on, it’s the Triple Take.

It has a magazine size of five, so not large but does provide a hefty 69 and 138 damage to the body and head. This is another gun that will pay dividends if you’re accurate. Another minor downside of the weapon is its use of energy armor which is slightly harder to come by.