The Wingman is a powerful weapon in Apex Legends but it can sometimes be difficult to master. Popular Apex YouTuber ‘The Gaming Merchant’ has come up with two tips that can help you really improve.

Many would agree that the Wingman was the most potent and used weapon over the first few months of Apex Legends, mainly due to its consistent reliability at nearly all ranges.

While it may not be the most dominant gun anymore, due to several nerfs and new weapons added, it’s still very viable, especially when paired with an automatic weapon that has a high fire-rate.

The only downside to the Wingman, if you can even call it that, is that it’s not the easiest to use, as it takes very good aim to be able to consistently hit shots with it. That’s why a lot of the lesser-skilled players shy away from picking it up, despite its impressive track record.

In order to help players be more confident when using it, The Gaming Merchant has offered two key pieces of advice – use the 2x scope properly and learn to time the weapon sway. 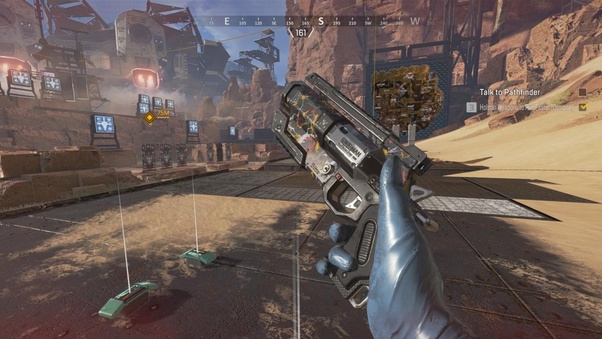 The Wingman has always been one of the more powerful weapons in Apex Legends.

The 2x HCOG “Classic” Scope, more commonly referred to as just the 2x scope, is arguably the most commonly used sight on the Wingman because it zooms in enough to increase precision without muddling up the field of view.

However, a lot of players don’t know how to properly use the scope’s reticle, which is a hollow triangle. Many believe that where you aim with the triangle’s tip is where the bullet gets fired, but that’s actually not true.

As The Gaming Merchant points out, the correct place to aim the target is in the middle of the triangle’s hollow area, as such:

Contrary to what most players believe, the aiming point of the 2x scope’s reticle is the hollow area of the triangle, not the tip.

Simple making this adjustment and practicing with it in the Firing Range will train your hand-eye coordination to start aligning your target’s head with the center of the triangle rather than the tip.

This should result in getting a lot more headshots using fewer rounds, but if headshots are still tough to get for you, then feel free to aim the hollow area at an opponent’s body, which is a lot easier to hit.

Learn to time the Wingman’s sway

As with most first-person shooters, a lot of the weapons in Apex Legends sway when aiming down sights, and the Wingman is no exception. Its sway moves down and up with very little horizontal movement.

The Gaming Merchant recommends two ways to go about learning to time the sway. The first is to wait until the reticle is at the lowest point of the sway, where it pauses for an instant, which is just enough time to fire a shot before it rocks up again.

The other method is to pull the Wingman slightly down after shooting because the sway “resets” after every shot so you can basically keep the reticle stationary and keep firing at the same spot each time.

A great way to integrate these tips into your Apex muscle memory is to load into Firing Range, equip the Wingman with a 2x scope and practice against the dummies.

While it may take more than just these two tips for you to master the Wingman, they will definitely help you take another step closer to dominating with the weapon.