Riot Games explain why Sage needs a nerf in Valorant

Sage is undoubtedly Valorant’s most popular Agent, but despite Riot’s previous attempts to nerf the Chinese Sentinel, it appears that another is on the cards.

While Valorant plays host to a diverse roster of characters, there are a select few that excel (in the current meta) more than others. Sage is most definitely one of those characters.

The Sentinel Medic is a jack of all trades, with her potential to slow down an enemy push or segment the map with her wall — if played correctly, Sage has a knack to turn the tides of a round in her favor on a dime… That’s not to mention her healing abilities!

It’s no wonder then, that Riot are so keen on nerfing Sage, with Valorant Character Design Lead, Ryan ‘Morello’ Scott, admitting that Sage is “really out of control,” while indicating that the source of her balancing issues might not be from her healing.

Sage is the most picked Agent across all ranks.

Why are Riot nerfing Sage?

One of Valorant’s Gameplay Researchers, Coleman ‘Altombre’ Palm, gave more of an indication as to why Sage could be currently deemed to be overpowered, with the rationale varying at different ranks.

It also seems that while a nerf could be in the works as a short-term fix, Riot could be looking towards introducing an Agent with similar abilities to increase the “choice competition.” 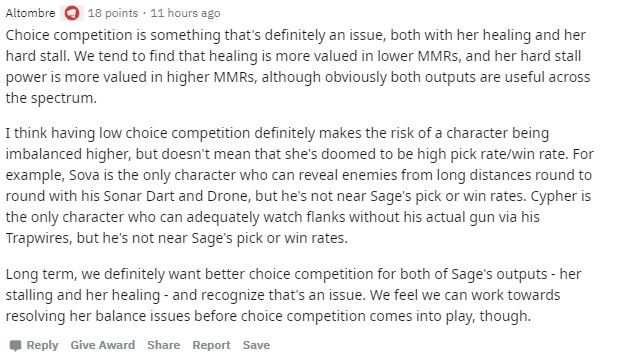 So what needs to be nerfed?

Well, given how influential Sage’s Ultimate can be on dictating the course of a round, it appears that could be an ability that is in the firing line.

“We’d like to keep the resurrect in the game, so we’ll likely be exploring tuning levers there first before resorting to something like a rework.”

With that said, Sage’s stalling abilities have been the part of her utility which has been tweaked the most. Most notably, her Barrier Orb’s overall health was decreased during Patch 1.00, alongside reducing its range during Patch 1.01.

By monitoring each of these across the different skill levels within Valorant, the dev team develops a solid picture on the meta, and most importantly, if one particular character is excelling within that meta.