Overwatch players are upset over the lack of in-game statistics

Overwatch does offer some in-game statistics, but they don’t tell players where they stack up against others, now players want to see a system that tells them what percentile they’re at for a certain skill.

This kind of data is available on sites like Overbuff.com if players link their accounts, but so far nothing like this exists in Overwatch.

Overbuff does a great job of taking players game statistics and seeing how they stack up against everyone else, it has one big drawback though, as players have to sign up in order to share their data, making it an incomplete database. 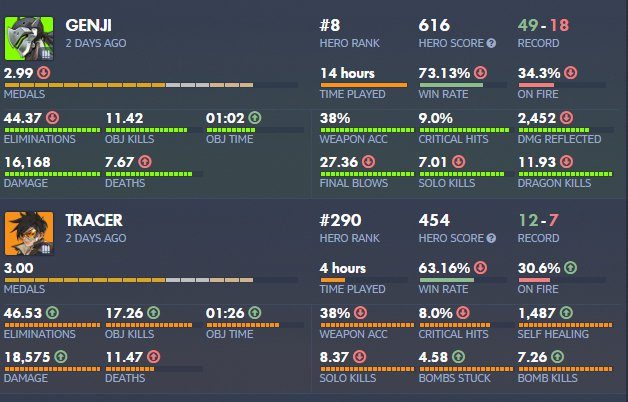 Sites like Overbuff take players stats and compare them against other players.
https://www.overbuff.com/

In a post to /r/CompetitiveOverwatch, user breakfastcook suggested that Overwatch should add stats on which rank players are in a certain skill, just like they do at sites like Overbuff.

That way, players would be able to look up say their average healing per match and compare it to other players using the same hero to see where they stack up, or if they could improve at all.

If Overwatch was able to do this, breakfastcook said it would be even more effective than Overbuff because the ability to incorporate the entire player base would allow players to compare themselves to all players.

OW should add stats on which percentile/rank you are in for different areas of skills in different heroes, just like Overbuff from r/Competitiveoverwatch

Currently, players can see their own statistics, but Overwatch doesn’t provide any tools to tell whether those numbers are good or if the player should work on improving.

Measuring a Gold player’s healing per 10 mins against a Top 500 players healing probably wouldn’t be much help.

Blizzard could have plans to change Overwatch’s in-game stats sometime during 2019, Director Jeff Kaplan said the team worked on “new game modes, new features, and new engine tech,” but so far there hasn’t been any major news on upcoming updates.