Last year, with little fanfare, Overwatch began a holiday stream on Twitch featuring Overwatch Director Jeff Kaplan sitting in front of a fireplace for hours on end, soon, fans were hooked, and a new Overwatch holiday tradition was born.

Jeff is a face familiar to Overwatch fans because he’s does the regular Developer Updates on YouTube and has basically become a meme himself.

Earlier in the year a group of players actually petitioned to have Jeff’s face added to the game as a spray; It’s not there yet, but Overwatch has brought back Yule Log Jeff for the holidays. 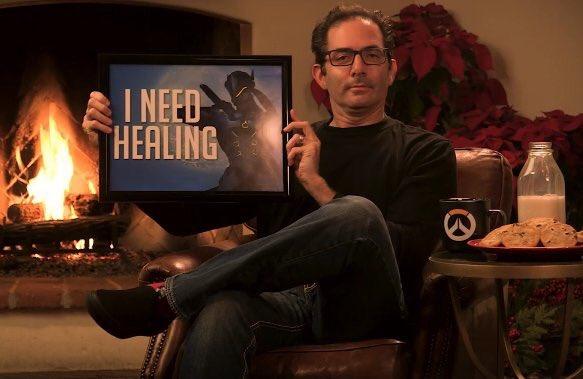 Most of the stream is Jeff sitting in a leather easy chair with a plate of cookies and roaring fire crackling behind him.

He will occasionally move, last year he moved to eat a cookie and, among other things, hold up a picture of Genji that says “I need healing”, a shot that spawned a thousand memes of its own.

Jeff sat in front of the fire for about 10 hours last year, so expect a similar marathon of relaxation this year; if you miss the stream don’t worry, Overwatch should put on a replay stream for Christmas Day.

The living room setup has changed slightly, and there may be several guest appearances from Overwatch stars this year as an extra treat.

The Overwatch Yule Log stream is happening now on the official Overwatch Twitch channel, and you can watch all the Yuletide action below: