JJoNak once again led the league statistically in almost every category compared to other Zenyatta players.

JJoNak came into the league as a rookie at the professional level, having been scouted by New York Excelsior through his play on the online competitive ladders. In the months since his debut, he’s established himself as one of the best players in the world.

It was actually Ana that JJoNak originally made his name on, but in the Overwatch League he has cemented himself as the leading Support player, perhaps even the best player at any role, with his exceptional Zenyatta play.

Though Zenyatta is technically a support hero, the thing that separates JJoNak from other players is his ability to output damage. Not only is he incredibly accurate with the right-click volley at range, but his capacity for out-dueling diving enemies at close-range leaves his opponents with no good options to deal with him.

JJoNak’s proficiency is so great that the Excelsior has actually built a unique playstyle around it, with him as the central star player. The team plays to maximise JJoNak’s effectiveness, and he’s delivered to the tune of two stage titles and a 27-3 regular season record.

Of course, JJoNak isn’t solely responsible for the incredible success the Excelsior have seen so far in the Overwatch League, but the numbers back up the fact that in JJoNak the team has a weapon that no other squad can directly match. 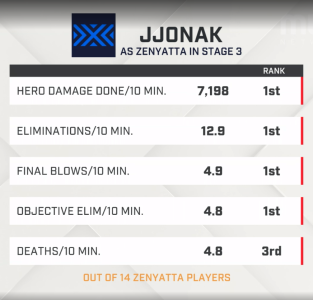