A Riot developer has revealed the first balance changes coming to their new League of Legends Teamfight Tactics game.

Teamfight Tactics is Riot Games’ recent entry in the autobattler genre, which rose to prominence in 2019 most notably with Auto Chess, which began life as a DotA 2 mod and has now been released as a stand-alone game.

The League of Legends-based Teamfight Tactics was released to the LoL Public Beta Environment (PBE) on June 18, but the game is already set for its first balance update.

Riot developer August ‘Riot August’ Browning revealed a host of changes that are coming for the new game mode that are due to hit the PBE on June 19.

Most significant are the changes to Blitzcrank, who’s getting buffs on his damage, missile speed, and pull speed, while Gangplank is also getting a damage buff. Darius and Graves are getting hit with minor nerfs, while Mordekaiser and Volibear are getting more neutral adjustments.

Also noted is that while Riot aren’t yet applying any nerfs for Draven, who they intend to be a “top tier DPS”, they are monitoring him in case he becomes too dominant. 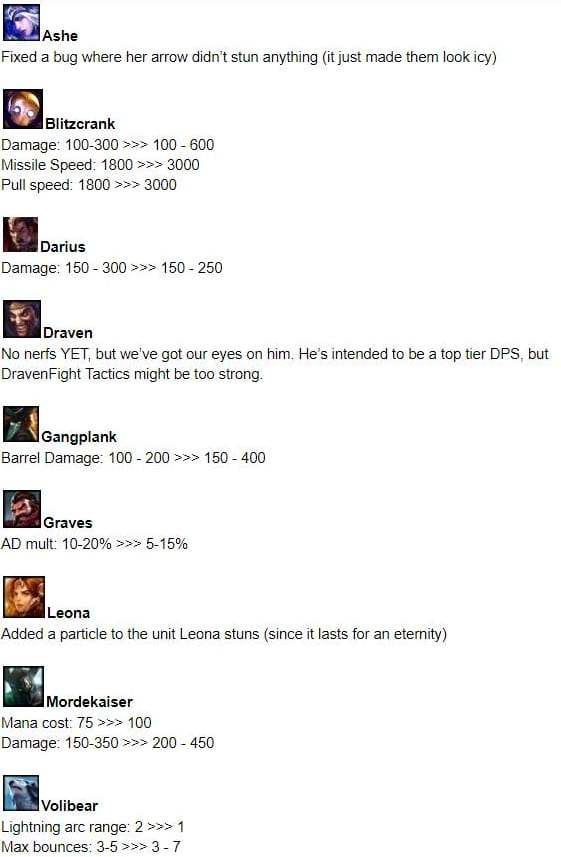 August also highlighted that, unlike League of Legends itself in which, ideally at least, all champions should be capable of having a similar impact within the context of their role and with the right circumstances, in Teamfight Tactics there are more deliberate differences in power.

Some champions are intended to be weak while others should be stronger, resulting in a clearer hierarchy of power that is not just a product of meta or match-ups.

Teamfight Tactics is currently only available on the League of Legends PBE, but it is expected to be released in full alongside LoL patch 9.13 on June 25.

Despite being essentially an entirely separate game, Teamfight Tactics will be implemented as a mode in League of Legends, so LoL players will immediately have access without needing to download a new client.

Those that wish to try out the game in the meantime will need to sign up for a PBE account, which requires having a LoL account in good standing, and download the PBE client.