Classic Hearthstone cards returning to Standard in ‘Doom in the Tomb’

Hearthstone began their Halloween event “Doom in the Tomb” on October 8 and along with the event update, a number of classic cards have been brought back into Standard Play.

The limited time Doom in the Tomb event went live on October 8 and will end on the morning of October 30 – and has a unique Tavern Brawl for each week of the event.

23 cards from Hearthstone history have also been brought back into standard play and every player will receive a copy of all the cards during the event, even if they already own some of them.

The cards are considered event cards so they aren’t permanent additions to your collection past the event’s end date – they also can’t be disenchanted or crafted into materials.

What cards are returning?

As we said before there are 23 total Classic Hearthstone cards returning for Doom in the Tomb – 2 for each class and five neutral cards.

All of the cards added will remain in Hearthstone following the event, until the game’s next major patch.

The full list of cards added for the Doom in the Tomb update is below: 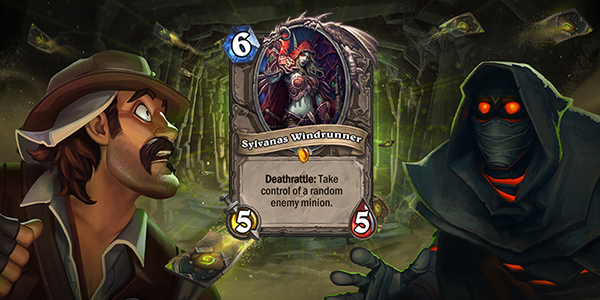 Sylvanas Windrunner is coming back to Standard Play with the Doom in the Tomb update.
[ad name=”article4″]

Why are these cards coming back?

All of the cards returning for Doom in the Tomb are definitely heavy hitters and have the chance to change the course of a game.

Take for example Sylvanas Windrunner, which takes control of one random enemy minion as soon as the card is played.

Despite the controversy surrounding the game at the moment following a Hearthstone pros comments on the Hong Kong protests, most players seem to be excited about the new event and the returning cards.

All 23 cards will be given to players for free during the event, and will be allowed in Standard Play until the next major Hearthstone update.

Players that don’t have all the cards, but still want to use them, will have to figure out some way to craft or unlock them for use in Standard before the next big patch.