The gunman who opened fire on a Madden 19 tournament on Sunday had a history of mental illness but obtained guns legally.

David Katz, 24, killed two competitors at the tournament in Jacksonville, and injured multiple others, before turning the weapon on himself and taking his own life.

Now, according to multiple reports, it has come to light that Katz was hospitalized twice as a teenager in psychiatric facilities and prescribed antidepressant and antipsychotic medication.

The information reportedly comes from court records relating to Katz’s parents’ divorce in 2007, according to reports from the Associated Press.

The parents appear to have strongly disagreed with each other on how to care for their son, with the father claiming that his estranged wife was exaggerating the illness as part of their custody battle. 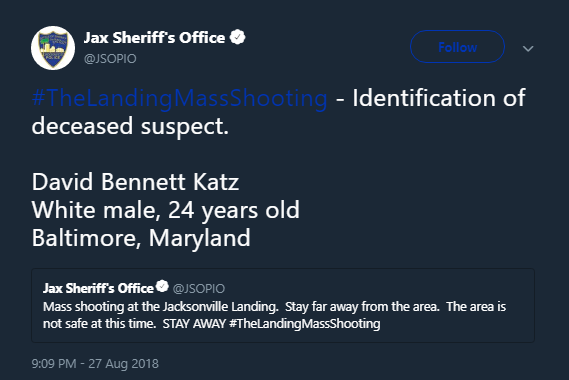 Jacksonville Sheriff Mike Williams also revealed that the shooter was able to purchase his firearms, a .45 caliber handgun and a 9mm handgun, legally from a licensed dealer within a month of his devastating attack

Williams went on to explain that only one of the weapons was used, that one of them had an aftermarket laser sight that attached to the trigger guard, and that it was clear that Katz “targeted other gamers at the event”.

Katz was a player in the Madden tournament and was eliminated in the early stages, but police investigating the shooting say that they have not yet determined a motive for his attack.

Eli Clayton, 22, and Taylor Roberston, 28, have been identified as the competitors that lost their lives in the fatal shooting. Both were well known within the Madden community, with EA stating “their deaths are an inconceivable tragedy”.