What will the PlayStation 5 look like? Rumored dev kit gives sneak peek

On August 20, a Sony patent was discovered that is rumored to to be the dev kit for the PlayStation 5. Could it be what the final design will look like?

With Microsoft announcing that its next gen console ‘Project Scarlett’ is coming out in 2020, all eyes are on its main competitor Sony to finally announce its plans for the follow up console to the PlayStation 4.

A user on Twitter discovered a patent filed by the Japanese developer containing what was initially speculated to be a PlayStation 5 dev kit. Multiple sources have since confirmed that it is legitimate.

A Twitter user by the name of Andrew Marmo first found the patent on August 20, and posted a photo and the link to it on the social media platform, as he speculated that it could be a dev kit for the PS5.

“Sony Interactive Entertainment has patent a unknown electronic device that looks similar to a PlayStation Dev Kit system. Could this be the PlayStation 5 Development Kit?” he tweeted.

The sleuth then followed up with another tweet with more photos, which show a futuristic design with an emphasis on vents and airflow. Given that overheating and fan noise was a problem with past consoles, this new design could possibly be aimed at reducing those issues.

The patent is also a departure from its past design, as it almost has an upside down V-shaped cut out on the top, which has the console surrounded by vents on the top and sides.

A developer allegedly confirmed the kit is real

According to Comic Book, a developer by the name of Matthew Stott confirmed it was a PS5 dev kit, and even suggested it could be the final console itself.

“It’s a dev kit we have some in the office. Sony patent shows PlaySation 5 devkit – or maybe even the console itself,” he tweeted.

Stott is a veteran in the industry for over 30 years, and currently works for Codemasters, which is responsible for Onrush, Grid, and the F1 games. He has since deleted his tweet and closed his account down. 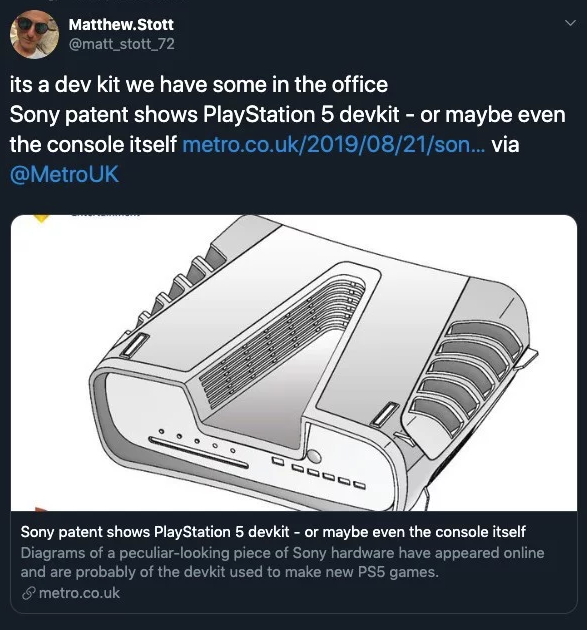 It should be noted that the final retail product for consoles often end up looking nothing like their dev kit. So if nothing else, this official patent could at least give us a glimpse into the PlayStation 5’s air flow design.