OpTic Gaming’s Hitch is Hosting a $10,000 Fortnite Tournament With Scuf and CheckMate Gaming

OpTic Gaming’s Davis ‘Hitch’ Edwards is hosting a $10,000 2 vs 2 Fortnite Battle Royale tournament in association with Scuf and CheckMate Gaming.

Due to take place this Saturday, September 8, the 16 team tournament will have a twist as only PlayStation 4 players will be allowed to enter:

Eight spots will go to duos that have been invited directly to the competition and the remaining eight will be go to teams that qualify. Matches will be streamed on Hitch’s Twitch channel, beginning at 8pm EDT.

The invited teams are as follows: 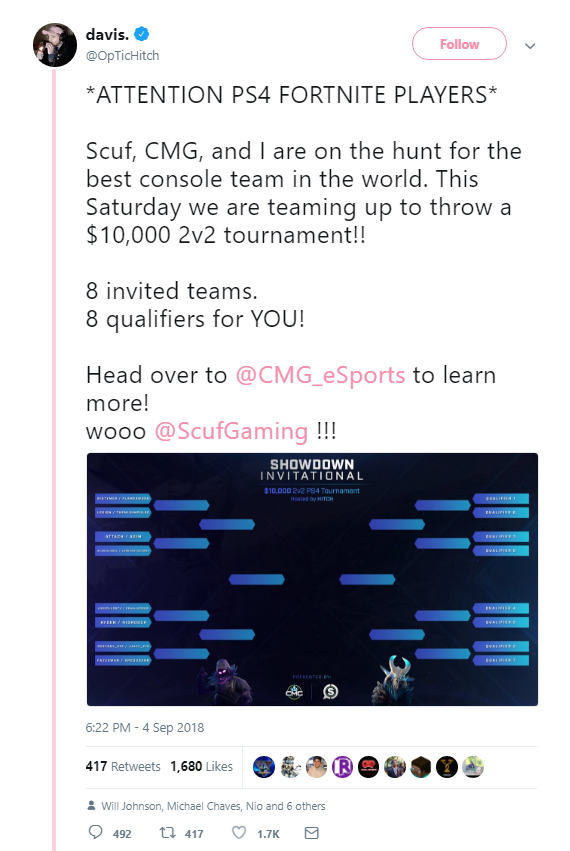 While the majority of top professional Fortnite players tend to play on PC, console players have also proven that they are capable of hanging with the best.

Ghost Gaming’s Ayden, who will be competing in the 2 vs 2 tournament, recently took 11th place at the Fortnite Summer Skirmish Series finals, beating a host of PC players from top teams.

This isn’t the only tournament that the OpTic man is in the process of organizing – he is also hosting a $5,000 Call of Duty: Ghosts throwback tournament on September 22 with some of the classic rosters from the game’s heyday.