Star streamer Tyler ‘Ninja’ Blevins has shared what he thinks are the major issues facing the competitive Fortnite scene and what solutions would put teams and players in the best position to succeed.

The competitive Fortnite scene has grown by leaps and bounds since the 2019 World Cup, but there’s still no dedicated, separate league for the ultra-popular battle royale, with most competitions taking place in online public matches.

In a September 26 voice tweet, Ninja explained that putting the highest-tier of players and teams in the same lobbies as regular, run of the mill competitive players who don’t know the game as well is one of the biggest hurdles to making Fortnite a legitimate esport.

“Without a dedicated league of respected teams and respected players, who obviously know how to play at a high level, and don’t grief and land on each other, or push random, dumb kills that won’t do anything and actually just ruin the game for themselves and the team that they’re griefing,” Ninja explained. “I don’t think that there will ever be full success and legitimacy of Fortnite competitive.”

My thoughts on competitive Fortnite. pic.twitter.com/PdZHahIw2E

Other games like Overwatch, Call of Duty, League of Legends, and CS:GO have their own leagues for players at the very highest level. Overwatch, LoL, and CoD have franchised leagues that organizations have to buy their way into, while CS:GO’s scene ensures professionals never have to mix with amateurs.

But, outside of the Fortnite World Cup, which featured 10 weeks of online qualifiers, that hasn’t manifested yet for pros in arguably the most popular video game ever.

“In terms of FNCS, in terms of this ‘next level’ Fortnitecompetitive for these pro players who are already established,” Ninja added. “There needs to be leagues and lobbies where they can queue up with teams and against teams that are just as good, who have qualified if you will and are there consistently. That’s how it needs to be if it’s ever going to be super looked up to or respected.”

After posting the audio clip, Blevins followed up by saying he’s seen “way too many times high-level players being griefed by lower quality players who don’t know when to fight and just ruin both games.”

It’s certainly not the first time we’ve seen complaints about the format, or lack thereof, in top-level competitive Fortnite; Ninja is just the latest in a long series of top players who have expressed frustrations with Epic Games’ apparent lack of interest in formalizing the scene.

These comments come on the heels of a string of tweets put out by esports insider Rod ‘Slasher’ Breslau, who likewise contended that Epic need to prioritize establishing a “competitive player community with a long-term plan.” 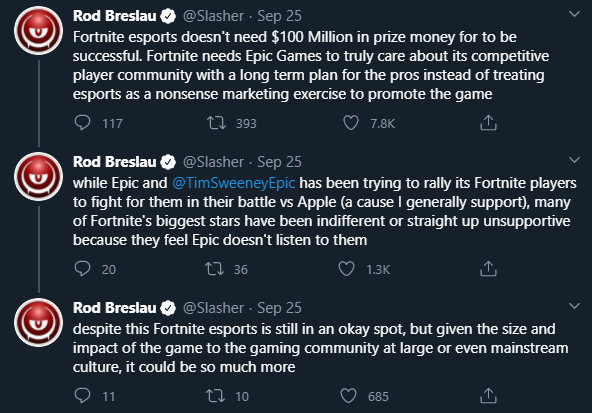 Of course, all such comments to date have fallen on deaf ears, or at least that’s how it appears, so whether or not we’ll ever see Ninja’s, Slasher’s, or anyone else’s suggestions come to fruition is a matter that only time will tell.