After having already postponed the launch of Fortnite Chapter 2: Season 3 and their in-game ‘Device’ event, Epic Games has announced that both will be further delayed once more.

On June 3, the developers announced that they are pushing the event back to June 15 and the upcoming season to June 17 in order to properly allow space for their communities to focus on the ongoing Black Lives Matter movement.

Like Infinity Ward’s decision to postpone Call of Duty: Modern Warfare’s next season, the decision-makers behind Fortnite are prioritizing the focus needed on social issues over celebratory in-game content.

In a statement released on their website, Epic Games emphasized their awareness of the ongoing movement’s vitality and how, despite the excitement over Fortnite’s future, they want to “balance the Season 3 launch” with the social work being undertaken by their team and communities.

This is the second time that both Season 3 and the Device event have been postponed. On May 28, Epic pushed back both launch dates to June 11 and June 6, respectively, so that their team could make sure everything was perfected on each launch day. 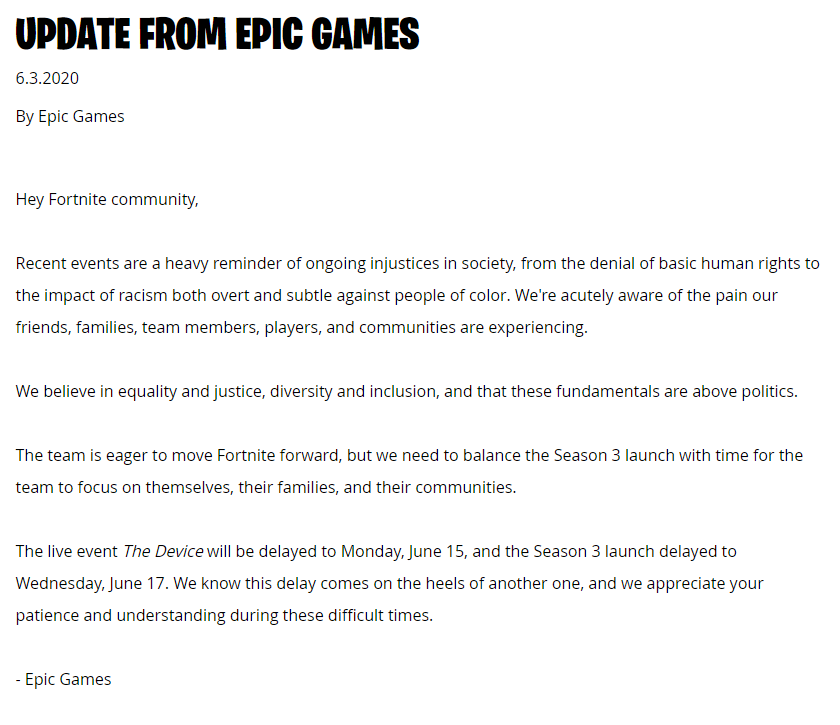 When does Fortnite Season 3 start?

Fortnite Chapter 2, Season 3 will now be starting on June 17, allowing some much-needed time for employees to amplify their involvement in a nationwide movement.

Based on prior seasons and leaks sourced by dataminers, substantial changes are expected, including new weapons and items, in addition to another Battle Pass and story.

Specifically, regarding the map, there are indications that parts of the island will become flooded, based on the leaked icon for the new season. The leaked Fortnite Season 3 icon in the PlayStation Store suggests that there could be a flood on the map.

When is the Device event?

As for the upcoming event, previously dubbed the Doomsday event by leakers, it is now scheduled to launch on June 15—two days ahead of Season 3.

Leaks also suggest that The Agency will be destroyed by Season 3.

Based on said leakers, the in-game event is expected to center around The Agency, with the Shadow vs Ghost storyline from Season 2 continuing as the popular area gets fully destroyed by some sort of massive explosion.

While it’s unclear whether that change will be caused by the event or happen during it, the Fortnite community is excited to get going and find out what exactly is going on in the popular battle royale’s storyline.

On the bright side, these new delays will at least grant the playe-base even more time to complete their Battle Pass challenges, as well as wrapping up any last-minute business they might have on the island.