Fortnite: Leaked challenge and reward for Day 8 of the 14 Days of Fortnite holiday event - Dexerto
Fortnite

Fortnite: Leaked challenge and reward for Day 8 of the 14 Days of Fortnite holiday event

Data miners have leaked the challenge and reward that will be featured in the eight day of the 14 Days of Fortnite holiday event.

The Day 8 festivities, which will go live on December 26, will feature a very simple challenge for players to complete – thank the Bus Driver eight times.

Thanking the Bus Driver, of course, means jumping out of the Battle Bus that carries players from the Spawn Island to the main Fortnite map at the beginning of each match.

This means that players will have to simply play eight matches and make sure that they jump out of the Battle Bus each time to complete the challenge.

Players can then just quit out and load in again to speed up the process, or play out each of the matches until they get eliminated or secure the Victory Royale. However, in order to make sure that each match counts towards the challenge, players might want to land and get eliminated rather than quitting straight away. 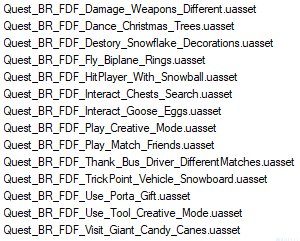 As for the reward, players who complete the challenge will receive an exclusive emote called ‘Take The Elf.’ The name is a play on the ‘Take the L’ emote and features that same dance, except the character pulls out a small elf instead of doing the L sign.

A video of the emote has been leaked by @ShiinaBR, a popular source of Fortnite leaks and information on Twitter.

This challenge and reward are expected to go live on December 26 at around 6 AM PT / 9 AM ET. Until then, this should all be treated as unofficial information which is liable to be changed at any time before then by Epic Games.

As for the seventh day of the 14 Days of Fortnite event, players have to use the Boogie Bomb and new Presents item at least a combined seven times, which then unlocks the Merry Munchkin pet.

A full guide on how to best complete this challenge, along with a map for where to find the most chests, can be found by visiting our 14 Days of Fortnite guide hub.

Nothing like a new friend for the holidays. Complete your new challenges and earn the Gingerbread Pet today! pic.twitter.com/zRKBh2uyR3