Fortnite stars like Kyle ‘Bugha’ Giersdorf, Timothy ‘Bizzle’ Miller, Cody ‘Clix’ Conrod, and more have been left scratching their heads after the $3k Vanish Cup invitational was canceled due to a trio of players allegedly griefing and teaming in the event.

The Vanish Cup was billed as “one of the biggest online solo tournaments” to be played in North America in recent times, with a host of major names from across the server kicking boots in the event with hand-picked competitors.

All seemed to be going well in the first round of the competition too, with Misfits Gaming player Clix and invited solo star Jonathon ‘Nittle’ Weinman both standing out as two early favorites.

As the storm closed in on the last remaining players, however, Vanish Cup officials noticed three players – all playing under alt accounts for the event – were gathered together on recently built structures, teaming together instead of fighting in the solo-only event.

To add to the problems, the three players, who had allegedly been given the code to the custom lobbies with the intention of griefing, were spamming rockets at other players in groups to make sure they couldn’t compete properly in the opening round.

As soon as the trio were noticed, the Cup was called to a halt, with Round 1 first set to be restarted, before casting pair Arten ‘Ballatw’ Esa and Shayan ‘ShyoWager’ Shehryar confirmed that the $3k event would be delayed, or canceled.

“There were teamers, and we will be making an investigation to discover who they were,” Ballatw confirmed when the stream returned after a brief delay. “We are obviously very disappointed that the NA East pro community, who were hand-selected, are choosing to grief the tournament.

“We have been forced to cancel the tournament, and reschedule for another time. It was going to be a great time, but of course, it gets ruined by a small few. We don’t know who (the alt account players were), but we will find out.”

The tournament, which also boasted major names from the North American Fortnite scene like Nick ‘Aspect’ McGuire, Rocco ‘Saf’ Morales, Noam ‘Megga’ Ackenine, and Daniel ‘Dubs’ Paul Walsh, has not yet had its next date set by the organizers.

Tournament founder ‘ImPapaMax’ confirmed the Vanish Cup would still go ahead, but said the organizers would have to take another look at working around the “horrible” custom game and third-party systems Epic Games currently has in place.

“The Vanish Cup was a success in the short amount of time it was live, although unfortunately, due to people cheating, it will have to be rescheduled to a later date with a larger prize pool,” the event organizers said in an official statement.

“We would like to apologize to all the viewers excited for the event who were disappointed with the short show. We are also very dissatisfied with Epic’s custom matchmaking services and treatment of third party tournaments.” 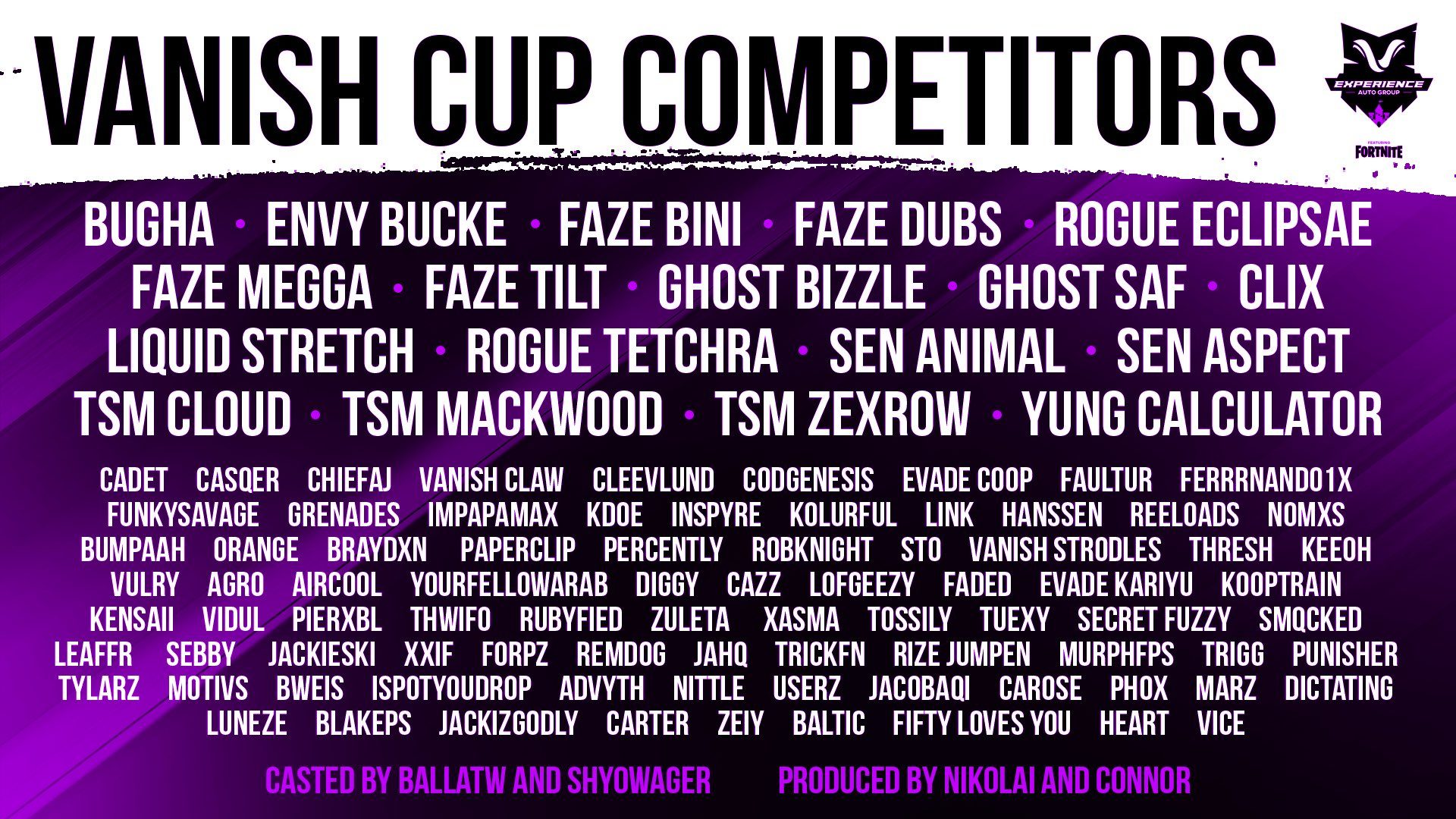 Event caster Ballatw also took aim at Epic after the incident, calling for privatization of custom games, and modding for access codes so that major tournaments with cash prizes could fight back against code leaks, griefing, and other problems.

“This isn’t even to say anything about the people who did it… Scumbags,” the disappointed caster said following the cancellation. “We can stop this with the right tools. We have no moderation ability. We have to trust 100 players, in some cases more. There’s a reason we have no third-party tournaments.”

This isn't even to say anything about the people who did it. Scumbags.
We can stop this with the right tools.

We have no MODERATION ability.

We have to TRUST 100 players in some cases more.

There's a reason we have no 3rd party tournaments.

The tournament cancellation is a disappointing look for the NA pro-community, especially considering Fortnite is still looking to find its footing as an esports against massive games like League of Legends and Counter-Strike.

Considering the major backlash that has already arisen about the griefing, as well as Epic’s poor custom game and tournament support, fans will be hoping the $3k tournament cancellation could lead to the developers taking notice, and maybe working on change.

Keep your eyes peeled for the next Vanish Cup announcement as well, which will be coming in the next few weeks alongside confirmation of a larger prize-pool for the next event.