The pro Fortnite team for 100 Thieves has broken the kill record for Squads on PC without the use of team-killing.

The team of ‘Kenith,’ ‘Parallax,’ ‘Risker,’ and ‘SirDimetrious,’ combined to get 54 eliminations in a match without killing each other in-game, which currently stands as the new record for eliminations without team-killing.

All four players were flown out to a location in Los Angeles to attempt to break the record, which they ultimately did after hours of hard effort.

Initially, many have seemed to be confused at 100 Thieves’ claim of breaking the record, since a squad featuring pro player ‘MoNsTcR’ and OpTic Gaming content creator ‘MaNiaC’ had gotten 55 eliminations in a match before.

However, 100 Thieves CEO ‘Nadeshot’ and his players clarified why their effort is the one true record.

The FaZe Clan record of 54 kills is not a true 54 kills. They team killed 2 of their own teammates which added 2 extra kills to their total eliminations. We reached 54 without using that glitch, we eliminated 54 enemy players. FaZe Clan is ridiculously talented so I don’t want to see as if I’m talking trash, I just want to clarify so everyone understands why we believe this is the new PC squads kill record.

2. There was no team killing. If we did what other people did, we would have had 56 🙂 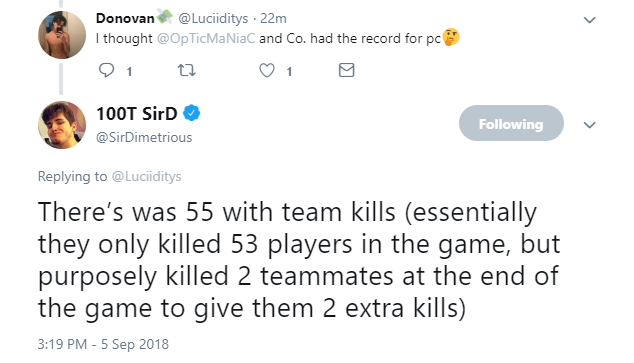 Although friendly fire is disabled in Fortnite, there are still ways to eliminate teammates, such as shooting down the builds they are standing on or impulsing them off of a surface high enough to cause fatal fall damage.

This sort of team-killing gives players extra eliminations, a tactic which the previous record holders, and FaZe Clan before them, used to set the record.

The full video of 100 Thieves’ Fortnite team getting 54 eliminations and setting the world record can be seen below: