With the current global situation affecting sports leagues all over the world, FIFA 20 has replaced Team of the Week with TOTW Moments – and the cards for Week 28 have now been revealed.

During the season, EA SPORTS puts a whole host of in-form players into FIFA Ultimate Team based on their performances in the real world, with some of the best players of that week getting upgrades in-game to reward their performance.

Of course, due to the ongoing global crisis, no matches are occurring, and EA had to think fast to keep bringing players Team of The Week content – and came up with Moments.

TOTW Moments brings Team of the Week drops from previous games to FIFA 20 Ultimate Team – in Week 27, we saw the likes of Jesse Lingard and Kyle Walker get upgrades based on FUT 18’s TOTW 28, bringing an interesting new dynamic to the weekly update.

Now, TOTW Moments 28 is here in FIFA 20, and the full team has been revealed – making for some interesting inclusions and players we might not have expected to make a Team of the Week ever again.

With some of the top stars from the Premier League, La Liga, Serie A and more, take a look at some of the players you could be picking up. 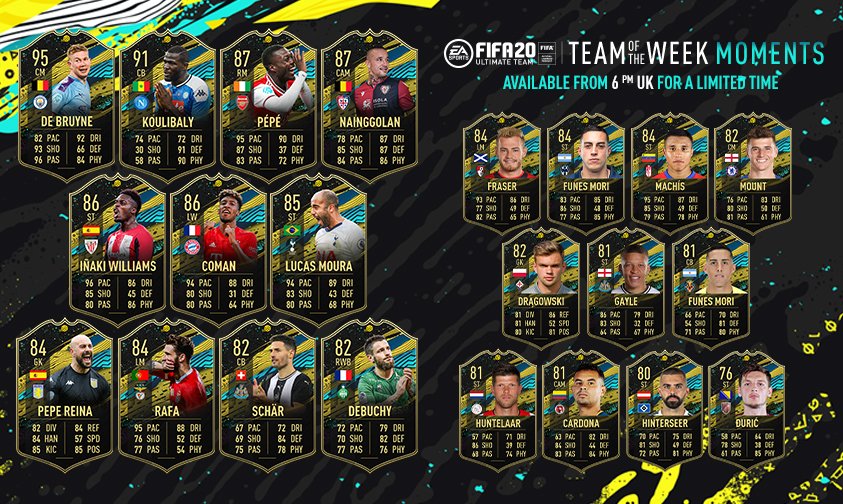 The likes of Kevin de Bruyne, Pepe and Kalidou Koulibaly will be welcome additions to players looking to bolster their teams, with 95, 87 and 91-rated cards respectively.

Players will also be surprised to see older faces such as Nainggolan, Dwight Gayle and Huntelaar, who have slowly fallen down the FUT (or real-life) pecking order over the years.