Fallout 76: Bethesda outlines future for the game heading into 2019

Bethesda has shared plans for some major fixes to Fallout 76 starting in early 2019, and have also pledged to be more transparent with the community.

Fallout 76 has been out a little over a month, but there’s already a laundry list of problems and issues with the game that fans have compiled.

Despite complaints that Bethesda is turning a blind eye to these complaints, the company’s latest release seems to show they do intend to stick with Fallout 76 for the foreseeable future.

In a release on December 19, Bethesda announced fixes coming to the Lever-Action Rifle animations, perk cards, and issues with crowd control to fix robots duplicating at Whitespring. Full patch notes for the fixes will be available at a later date.

Bethesda also announced that starting in 2019 patch notes for Fallout 76 would include thoughts from developers that are aimed at giving more context to the changes. 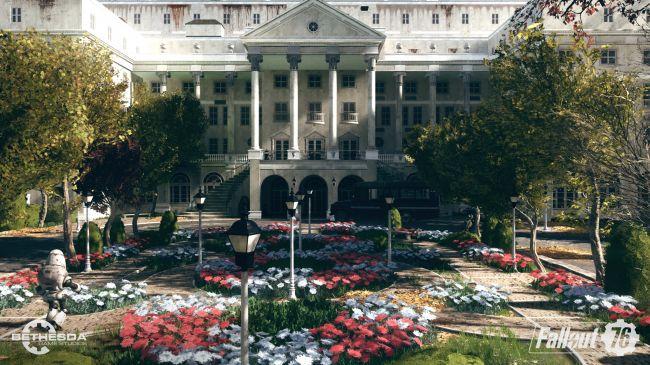 Whitespring Resort is being targeted for a fix in the latest Fallout 76 update.

It’s clear Bethesda is trying to improve it’s transparency with the Fallout community after the numerous controversies that plagued the game after launch.

While the changes might be a good start, there will undoubtedly be those out there who say they don’t go far enough to address the game’s long list of issues.

The full December 19 release can be read below:

Our sights are set for future updates. In mid-January, we will be releasing another patch that contains many fixes, including fixes for the Lever-Action Rifle reload animation, some perk cards, and we’re dealing some crowd control at the Whitespring by implementing a fix for the robots duplicating on the resort grounds. Full patch notes will be available at a later date that covers all the fixes featured in this update.

We understand that sometimes the patch notes themselves aren’t enough, and you want to know why we’re making certain balance changes or adjustment. Beginning in 2019, patch notes will include some brief thoughts from our developers that hopefully gives the community more insight into the changes we’re making and why.

We’re also hard at work on a new mode where you can work together, or not, without PVP restrictions. We’re already having fun playing it at the office and we’re hopeful to roll it out to all of you sometime in the first quarter of the year.

This is just the beginning of new content and continued updates. We’ll have a lot more to share throughout 2019.

BACK TO THE HOLIDAYS

Next week, our “Inside the Vault” falls on Christmas. To celebrate the holidays, we would love to share your best Fallout 76 holiday cheer.

During your ventures through Appalachia, capture your favorite festive photos using photomode and send them our way using #Holiday76 on Twitter or Instagram. We will be sharing our favorite images in our feature next week.

We’ll see you in the Wasteland!