There has been a lot of outrage from the esports community aimed at Evil Geniuses following their major brand revamp, and now former CEO Alex Garfield has joined in on the backlash.

Evil Geniuses shook the world of esports on December 12 by announcing a huge revamp of their brand going into 2020 and the new decade.

Part of that overhaul was the creation of a brand new logo that replaced their old one, which was one of the most recognizable and iconic insignia in the history of esports.

However, in the court of public opinion, the organization has been crucified for that decision, as heavy criticism has rained down from fans, pro players, and other organizations alike.

On December 13, their ex-CEO Alex Garfield, who sold EG back in 2014, tweeted out his reaction to the new logo, and it pretty much mirrored what everyone else has been saying up to that point. 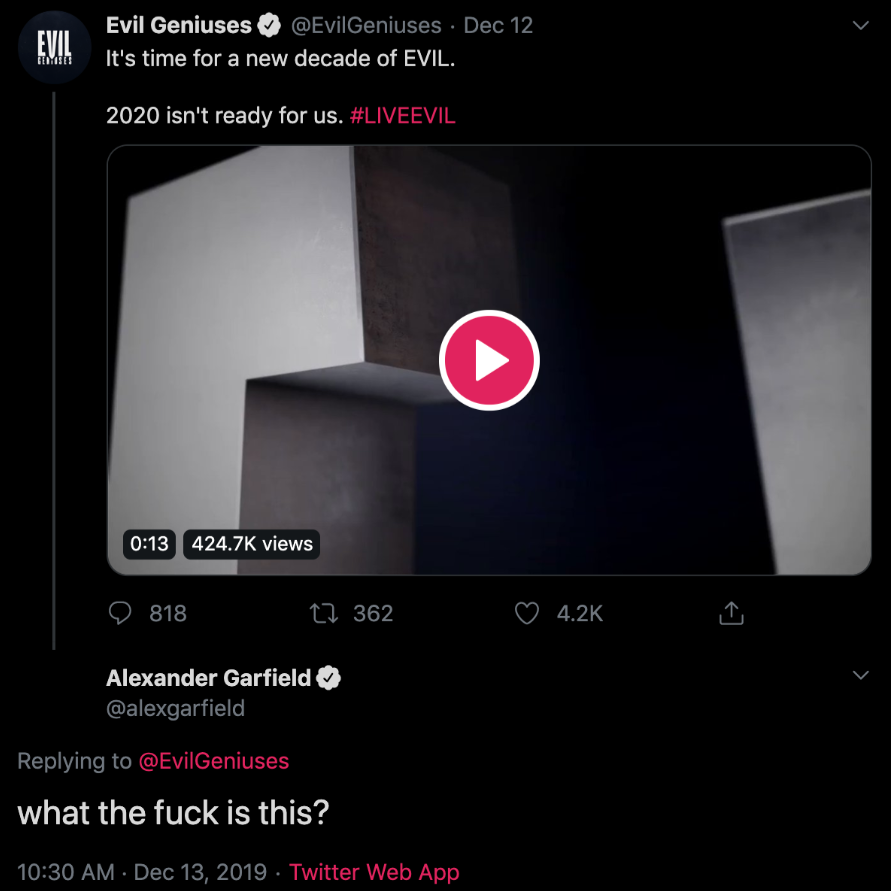 That post ended up being the first of several tweets in which Garfield expressed his resentments about the direction that the EG owners were taking the company.

“Clearly, some people have forgotten how and why Evil Geniuses came to be in the first place,” he wrote. “And ever more clearly, the story of how and why it came to be where it is now has gone silent for too long.”

In this “history lesson,” as Garfield called it, he went into his regret about who he sold the organization to and how they’re not properly “safeguarding the brand and its legacy.”

“It’s on me for being foolish enough in 2014 to sell my company to somebody who told me that an exit would mean empowerment and not negotiation, but that doesn’t excuse any of the things that happened subsequently.”

“It certainly doesn’t excuse people having selective memories about those things and even trying to sweep them under the rug,” he went on. “Especially those who are currently tasked with safeguarding the brand and its legacy.”

Neither she nor the organization have offered a direct response to Garfield’s comments, but their official Twitter page did tweet out a parody mocking the logo they had released the day prior to very negative feedback.

We heard your concerns.

Dexerto has reached to Jameson about Alex Garfield’s comments and are currently awaiting a response.