The TikToker behind the site’s wildly popular “M to the B” video is facing allegations of racist behavior, after viewers took issue with one of her tattoos and a nickname she’d given to one of her friends.

Bella Poarch rose to fame in mid-September, after uploading herself lipsyncing to Millie B’s “M to the B” on TikTok.

This quickly skyrocketed her to viral status on the already popular video app, receiving a mind-boggling 30 million likes and breaking the site’s record for getting the most likes on a single post.

Of course, with internet stardom comes internet critics, who quickly uncovered some offensive behavior from the star that is causing some major drama around her newly-famous status.

Viewers were quick to take issue with one of Poarch’s tattoos, which is the Japanese Rising Sun — a symbol known for its use on the Japanese Imperial Flag in WWII.

That’s not all; others accused her of using an offensive nickname to refer to one of her friends, claiming that she’d called the friend — a person of color — “Harambe.”

Poarch addressed the backlash in a series of TikTok comments on September 16, clarifying that her friend is okay with the nickname and that the name had stuck during his time in the military.

TikTokers were quick to call out Poarch for allegedly calling her friend a racist nickname.

“I’m sorry that you believed rumors about me and my best friend Albert,” Poarch wrote. “He’s Samoan and not Black, and that’s his military nickname because he’s big and always very protective. That was his name before I even met him.”

“Please stop spreading lies,” she continued. “He’s very heartbroken and sad about this. We’ve been friends now for three years and for people to tell me I was treating him wrong… breaks my heart, too. I’m sorry.” 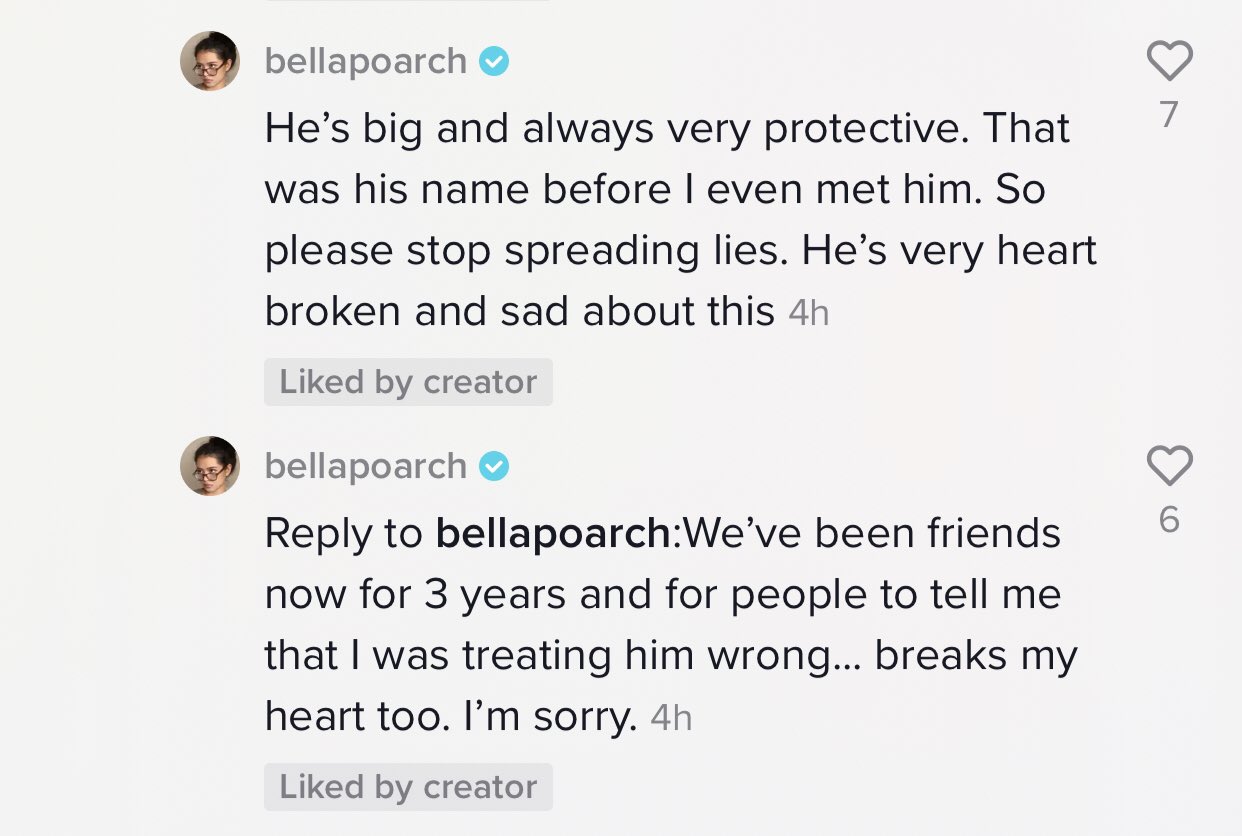 Poarch previously published an apology regarding the outrage around her tattoo, writing in a series of Tweets, “I apologize to Koreans, because six months ago I got a tattoo of the red sun with 16 rays. At that time, I didn’t know the history, but when I found out, I immediately scheduled it for removal.”

I apologize to Koreans because 6 months ago I got a tattoo of the red sun with 16 rays. At that time, I didn’t know the history. But when I found out, I immediately had it covered and scheduled for removal. I am ashamed of myself for not doing my research. I sincerely apologize.

Considering her relatively quick rise to internet fame, it comes as little surprise that critics aren’t happy with her response to the matter, likewise finding fault with TikTok fandom for producing massive social media stars with relatively short turnaround.