A number of popular content creators have spoken out about how Twitch are promoting their New Year’s Eve stream after pre-roll advertisements appeared on their channels.

The year 2018 was undoubtedly a pivotal year for Tyler ‘Ninja’ Blevins, who blew up in popularity after becoming the face of Fortnite, growing in tandem with the game’s success to make him the most followed channel on the platform.

In order to celebrate the end of 2018 and welcome in 2019, Twitch and Ninja have teamed up to host a New Year’s Eve stream, live from Times Square in New York City.

The project had received unanimous support from the Twitch streaming community, however that all changed on Thursday December 27 when adverts for the broadcast began to appear on other content creators channels.

Dr DisRespect spoke out about the situation on Twitter, asking Twitch to “get these ugly looking New Years Eve ad rolls off my page”.

Don’t ever do it again either.

He wasn’t the only one who objected to the pre-rolls, with other content creators complaining that it was a conflict of interest because it was advertising another streamers channel on a night when many had their own special shows planned.

I will register my opinion on Twitch advertising Ninja's New years Eve stream on other broadcaster's ad rolls, and likely my own channel. I don't like that. It is a direct conflict of interest and I am not a fan of it. This should be a given, and just common sense. @Twitch

Things took a turn when SkyWilliams got involved, responding to BikeMan to say that he was actually giving Ninja more exposure by complaining.

you’ve inadvertently promoted it to me cuz i had no idea lmao But i don’t think it’s that abhorrent. he’s twitches poster child. he’s garnered tons of success for them. it makes sense

This promoted Ninja to respond to Sky and BikeMan, claiming it would grant other streamers exposure because it was ultimately being promoted to millions. He later deleted the Tweet shown below. 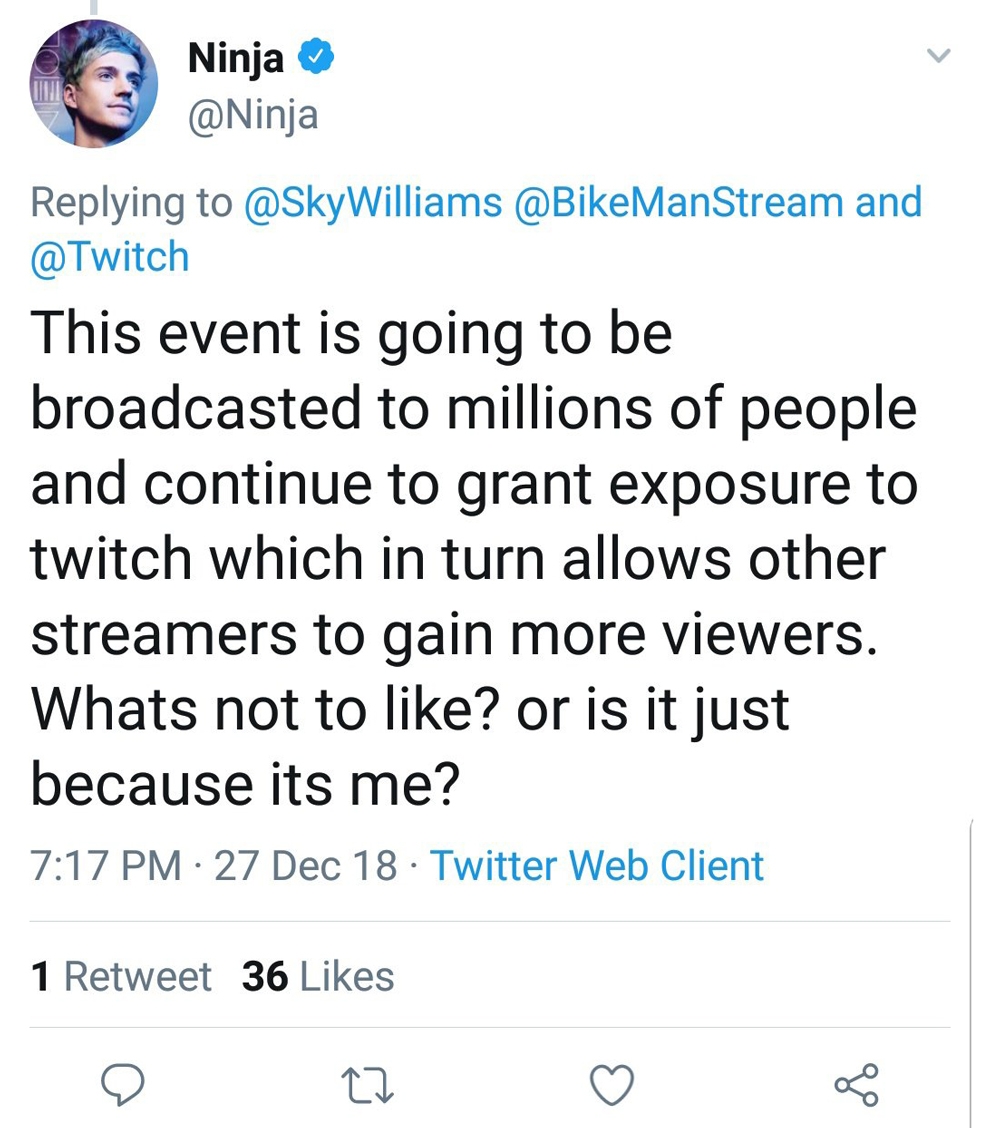 The deleted Tweet by Ninja responding to the backlash.

With more content creators getting involved in the discussion, it remains to be seen if Twitch will stop the pre-rolls or continue to push the event to their audience.

If you want more information about Ninja’s New Years eve stream, you can view our dedicated viewing hub.