The Dota 2 community has pulled together yet again to give The International 2018 the biggest prize pool in the history of esports.

The record for the biggest prize pool in any esports game was previously held by The International 2017, which boasted a staggering $24,687,919, and continues Dota 2’s run of breaking the record every year. 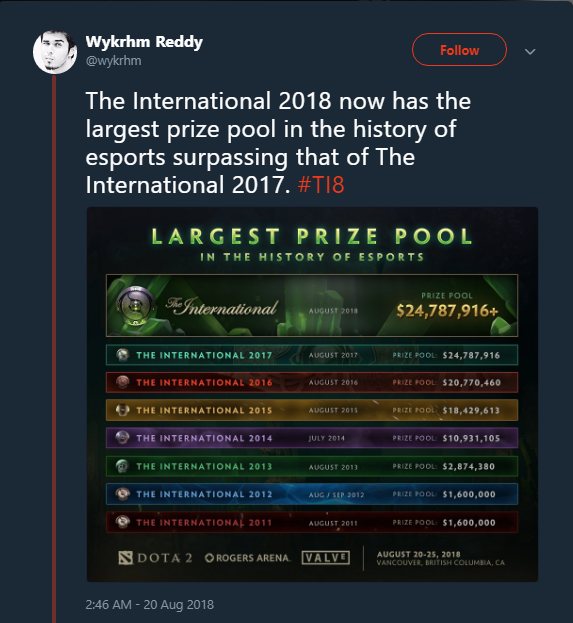 In fact, Dota 2 now holds the record for the top five biggest esports events with the 2016, 2015 and 2014 installments of the competition rounding out that list.

To put things into perspective, The International 2014 (the fifth biggest esports prize pool) featured a prize pool of just under $11 million and the 2016 League of Legends World Championship, which is in sixth place, had just over $5 million.

The International is Dota 2’s world championship and every year Valve sets up a compendium or battle pass that allows players and fans to contribute to the prize pool, with 25% of all sales going directly towards the total.

As of Monday, August 20, those purchases and in-game sales mean that this year’s winning team will secure themselves over $10,900,000.

Even more staggering is the fact that there are still a few more days of crowdfunding left to go, so breaking the $25 million mark seems to be almost guaranteed. You can keep up with the prize pool by looking at this tracker online.