The new CSGO operation Shattered Web released on October 18 and brought with it, among other things, unlockable custom player skins. But how impactful are these new character models going to be on the competitive scene?

Operation Shattered Web brought a welcome breath of fresh air to Counter-Strike. After over two years, CSGO players were able to experience a brand new operation, and the newest one might be the largest and most drastic yet.

The sought after weapon balance changes came with the new operation, in the form of a price increase to the Krieg, and price reductions and buffs to the Galil and the FAMAS. Along with these changes, there’s also new maps, weapon skins, cases, a battle pass system with all types of missions, and unlockable custom models.

Yes, as players progress through the Battle Pass rewards system, they will unlock several new uniquely designed player models. These models are referred to as Shattered Web Agents, and separated into four tiers. The tiers are Distinguished Agents, Exceptional Agents, Superior Agents, and Master Agents. 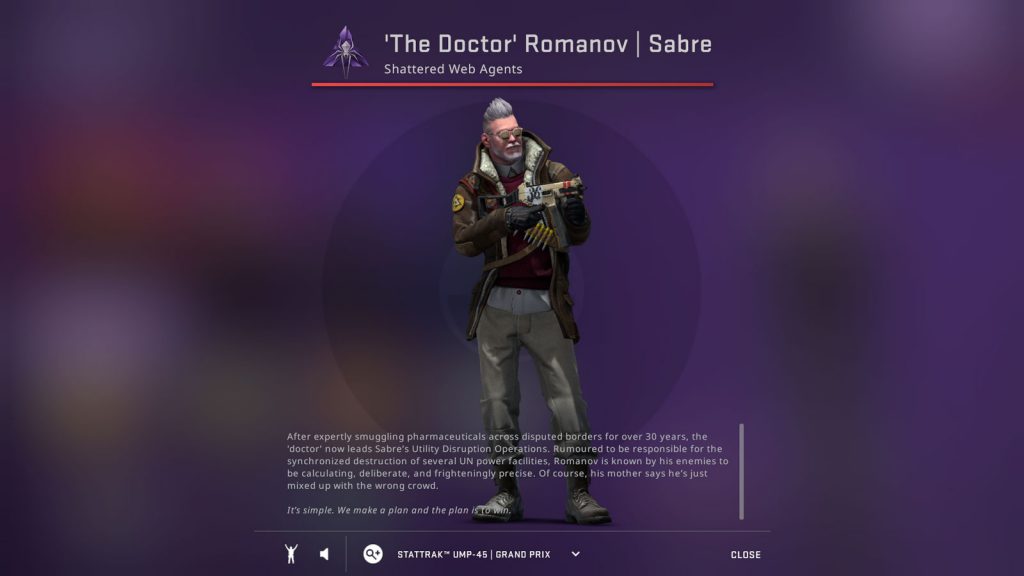 The Doctor (and his massive collar) is in.

Players will earn one from each tier as they complete Operation missions and earn stars. They can also just buy stars outright from the Steam store.

While model variety and the option to have players select their models have both been requested by the CSGO community for some time, the additions via Shattered Web may present some problems for competitive and pro players.

Pro players are already reporting issues with playing against certain models on specific maps, with regards to the problem of blending in. There are several instances where characters become hard, if not impossible to see.

Reddit user Zacp635 posted a collage of images comparing the default CT to one of the new Seal CT characters holding common positions on Cache.

Default CT vs MTP Seal CT on cache. Cropped from 1080p screenshots from the position you’d likely be peeking them (IMO). Do you agree with agents being in the game? from GlobalOffensive

In the majority of these comparisons, the new CT model is harder to spot, and significantly so on spots like Truck. Cache has also recently undergone a mostly green visual overhaul, which would allow several of the new CT character models that are green to have the advantage of camoflauge.

ENCE marketing director and analyst Joona ‘natu’ Leppänen and Vitality’s Nathan ‘NBK-‘ Schmitt have said that it’s not just the coloration of the models, but the size and accessories too that affect the ability to crouch and hide in certain spots.

Exactly what I was thinking about and what I saw too, definitely can make a difference and hide in corners where you couldn't before

Is there a solution?

The problem hasn’t been addressed by Valve yet, but some professionals are already suggesting ideas on how to remedy this.

Team Liquid’s star Jonathan ‘EliGE’ Jablonowski suggested the use of a ‘minmodels’ command that would change the player models in-game to default for the player. EliGE explained on Twitter that this command is client-side, not server-side, meaning spectators would still get to view the unique skins, but they would appear as default to players using the command.

In his most recent video about the new operation, CSGO YouTuber TheWarOwl suggested “disabling custom player models” at pro events. Some players suggested that custom models should only be viewable to teammates.

Shawn ‘FMPONE’ Snelling, who designed and then re-designed the Cache map where the issue is particularly bad, called the custom models “game breaking” and “bad for gameplay,” saying they could only work if an option to disable them exists. FMPONE says that mappers use certain skins and colors to create clear contrast, and that gets eroded by the custom player models.

Custom player models in CSGO is, unfortunately, game breaking. The only way this idea works is an option to disable it.

Sorry. I know this isn’t what Valve wants to hear. The idea is bad for gameplay. Mappers pick certain skins (.kv file) because they want clear contrast https://t.co/zwf7Aia5dE

Some fans even suggested Valve could be using custom player models based on pro teams in the future, and EliGE’s idea of the minmodels command would allow organizers to show those skins on stream while not affecting gameplay.

Will custom models now be a part of pro team’s strategy? Will custom models fall off if pros don’t use them? It’s only been two days into the Operation so far, but CSGO as a whole may already be at a crossroads.