Fnatic's JW missed a family funeral to attend the FACEIT Major but made it count vs Vega Squadron - Dexerto
CS:GO

Jesper ‘JW’ Wecksell was forced to miss his grandmother’s funeral in order to continue representing Fnatic at the FACEIT London Major.

The CS:GO star shared the unfortunate news on Twitter late on September 13, the day before Fnatic’s clash with Vega Squadron in the 1-1 pool of the New Legends Stage.

“Playing Vega Squadron tomorrow. Sadly I will miss my grandmas funeral,” JW stated. “I know she is watching so I will do everything to get a win and make her proud! Rest in peace mommo.” 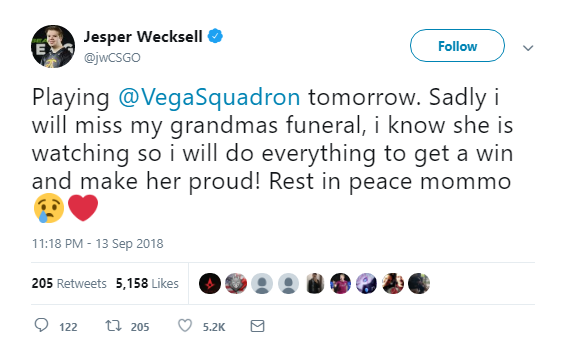 While Swedish star certainly made his decision count as he made the most pivotal play of the match in Fnatic’s nail-biting 16-14 win over Vega Squadron.

Vega appeared to be in the ascendency towards the end of the match but JW produced an incredible one versus three spray transfer clutch in round 23 to destroy Vega Squadron’s economy and take the upper hand.

Vega were unable to bounce back from the crushing round loss and the analysts highlighted it as the deciding moment of the game. JW was out-fragged by Freddy ‘KRIMZ’ and William ‘draken’ Sundin but produced the goods when they were required.

Fnatic now hold a 2-1 record in the New Legends Stage and need just one more win to advance despite their poor first round showing against compLexity. If JW can continue to produce some vintage clutches, things can only get better for the Swedes.