Professional CS:GO player Robin ‘robiin’ Sjogren had his VAC ban for cheating overturned after an appeal.

He received the ban from Valve’s Anti-Cheat program in 2013 for a separate game, buying a cheat for Infestation: Survivor Stories, an open world zombie game.

Infestation: Survivor Stories was previously known as “The War Z” and has a 20/100 rating on Metacritic.

The VAC program is most popular for detecting cheaters on Counter Strike, but it can apply to any game on the Steam platform if the developer chooses to support it.

Bans are not supposed to be across the entire platform, they are usually enforced only on the servers of the game you were banned in.

Players banned through the VAC system are also unable to compete in Valve sanctioned esports events of the same game.

Since robiin was banned for a game that was not CS:GO, he appealed to Valve to overturn his case. They replied and robiin shared the news on Twitter. 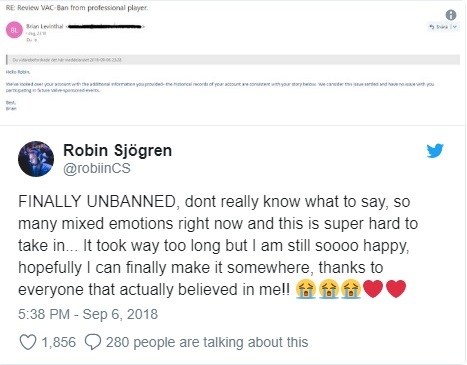 He competed in non-sanctioned events for Epsilon and Team Endpoint recently, winning the Multiplay Insomnia 63 on August 26 in Birmingham.

robiin’s ban for Infestation: Survivor Stories may still apply, but the servers for the game were shut down in 2016.