Splyce have announced that they have officially parted ways with Call of Duty pro player Ben ‘Bance’ Bance.

The organization took to Twitter on Thursday, September 13 to announce that Bance was no longer a part of the team, and thanked him for the time he spent competing under the Splyce banner.

Today we part ways with Bance. We thank him deeply for his devotion to Splyce Call of Duty and wish him the best of luck in all his future work. 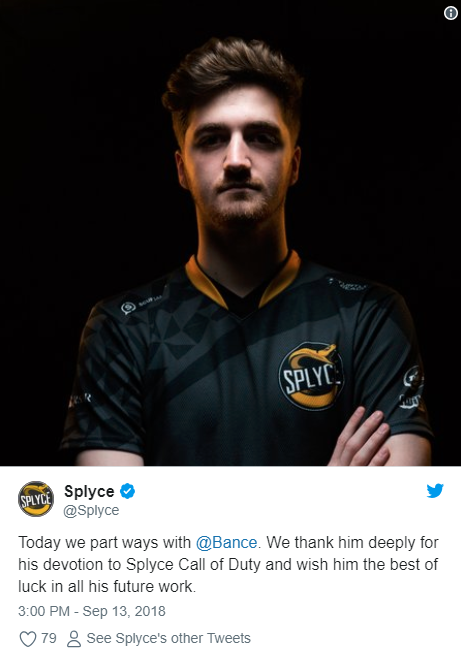 Bance has been a long term figure in Splyce’s Call of Duty lineups, first joining the organization back in December 2015 during the Black Ops III season. He was also an integral part of the Splyce team that secured first place in the CWL Global Pro League back in May 2017.

The Englishman announced that he was a restricted free agent in August, so the news that he has left the Splyce organization suggests that a team has bought out his contract and acquired his services.

Bance has taken to Twitter to thank his former organization, stating that it was a pleasure to represent “an organisation that backed you no matter what happens.”, and wished them “the best of luck in the new route they’re taking”, which could be a nod to the reports that Splyce intend to pick up players based outside of Europe to team with Jurd.

With the first Black Ops 4 competitive event set for December 7, it will be interesting to see who Bance lines up with when the action begins in just a few months time.